Join Nellie on an Out of This World Experience to Win Huge Sums of Money! 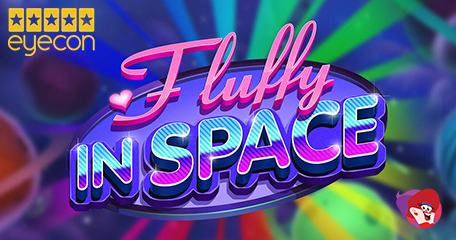 Nellie the elephant has packed her trunk and waved the funfair goodbye in the latest Fluffy slot instalment by Eyecon, and it’s guaranteed to take players on an out-of-this-world gaming adventure. Are you sat there thinking ‘what the hell is she on about’—then let me elaborate. Nellie the elephant is the star of the Fluffy Favourite slot machine featuring cute and cuddly stuffed animals who provide hours of endless fun…

…thanks to an arcade-style bonus game and a fascinating bonus spins feature. But now, Nellie and her mates are ditching the candyfloss and leaving the claw machine behind in favour of something a little more unique, so grab your astronaut outfit and your helmet because this is one adventure that is going to take you further than ever before!

Floating around the vast emptiness of space is where you’ll find the usual ‘Fluffy Favourites’ characters. All eyes will be on the floating characters, all adapted to survive the extreme elements of space. Wins are achieved with at least a three-of-a-kind combination, with one exception; the rocket, which has the potential boost your bankroll when only two symbols fall onto your win line.

Nellie the elephant is another scatter, but she’s not just any old scatter – she hides a secret bonus feature and to access this, three or more Nellie symbols are needed. Making her appearance on reels 2, 3 and 4, Nellie can appear in stacks of two – remember, just three are needed for the thrilling ‘Fluffy in Space’ bonus. Once activated, the only symbols that count are Nellie. The feature starts with Nellie symbols from the base game locked in position and 3 re-spins are granted. If this icon appears in a different section on the reels, she will too become locked in place and the re-spin count resets to 3. The re-spins continue until there are no new Nellie symbols found…

…or until you have a reel engine completely full of Nellie symbols and you know what this means – astronomical wins! Each one will award a multiplier prize of up to 500x your total bet; this could result in 15 multipliers of up to 500x – wow!

Another hidden feature of this cosmic slot is the progressive jackpot element; three progressive jackpots which tick over until they’re randomly won! Fluffy in Space is an impressive improvement on the previous creations and it’s now available to play at a huge number of online bingo sites, including Jumpman Gaming powered favourites; Fever Bingo, Lights Camera Bingo, Charming Bingo, Bite Size Bingo  and Viking Bingo.

I love this game! From minimum bet of just 25p I managed to win over £75 from the Nellie in space feature.