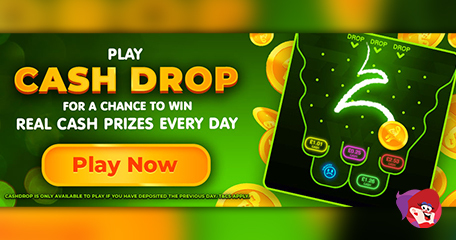 LBB’ers! I’m super excited to bring you this piece of online bingo news because it involves a chance to win real money every day with Jumpman Gaming’s Cash Drop! Online bingo is awash with free-to-play daily offers; from Tombola’s 4Free to Costa Bingo’s catching rays, each is designed to give players more, but never in a million years did I expect to find a system such as this on Jumpman Gaming brands! The ‘one-look fits all’ umbrella can get a little tiresome after a while, especially when we’re seeing the same promotions day in, day out, so they decided to spice things up a little by offering something way outside their comfort zone – a daily freebie!

Cash Drop is an exclusive feature which gives you the chance to win real cash prizes every day, but it’s only available to players who have made a deposit the previous day. They’re not the first to introduce this rule and they won’t be the last – Mecca Bingo may offer the diamond spinner to all regardless of whether they have made a deposit or not, but its premium wheel is only available after a £10 spend.

Do you remember Bruce’s Price is Right on TV? If so, you may recall a giant wall where contestants would drop counters through the holes in the hope of landing a juicy prize. And the same can be said for the live gameshow from Evolution – Crazy Time, where a giant wall is just one of the features packed with cash. No need to trigger bonus rounds for this one, all you need to do is fund your account on the likes of Umbingo (or other Jumpman sites) and get a free chance to win the day after.

This brand-new and exciting feature is housed within player accounts and is ready to fire-up when you are. If we were giving out trophies for excitement, this one would win hands down! Think of a jelly mould packed with lime green jelly – now turn that upside down; the bottom is now home to cash as well as one ‘unlucky’ section. It’s hard to describe it, so the only way for you to see it is to log in for yourself and give it a go!

The rules state Cash Drop winnings will be credited instantly as real cash with no wagering. They also stipulate the new feature is a game of chance where winning a prize is not guaranteed. But if you were planning on playing anyway, there’s no harm in trying your luck! New customers can claim this as well as a spin of the mega wheel. Existing players won’t risk losing out either as any re-load offers will still be available should you wish to use them.

It was only until a few months ago we had the same stuff from Jumpman, but now they’re offering prize draws, tournaments and now a new daily game! They needed to...

It was only until a few months ago we had the same stuff from Jumpman, but now they’re offering prize draws, tournaments and now a new daily game! They needed to expand, or they’d lose customers and I bet they are super glad they did now! The bingo rooms are always jammed!