Make a Mountain (of Cash!) from a Mole Hill in New Yggdrasil Title 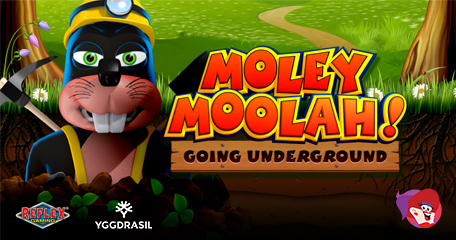 What seems to be a sanctuary of haven in a pleasant village of molesworth lies a threat – the threat of something sinister who is always looking to strike! Beneath the very feet in which we stand, lives a beast with an uncontrollable hunger for…money, and he aims to dig deep to fill your coffers in the new Moley Moolah by Yggdrasil and Reflex Gaming.

The new 5x3 video slot is the first title as partner by Reflex and it’s every bit as vibrant as it sounds! An inquisitive mole is the star of the show who has a few surprises up his sleeve for players. Three Moley Moolah scatters kick-starts the bonus spins mode where additional reel sets become unlocked. The more reel sets, the more ways to win!

Stuart McCarthy, Head of Partner Programs at Yggdrasil, said: “Moley Moolah sees the introduction of another partner’s title to our growing YG Masters portfolio and we couldn’t be prouder. Every member of the initiative brings something completely unique to the table and Reflex Gaming are no different. With an innovative bonus round and a loveable character, we can’t wait to see how this is received by partners across the world.”

The charming reel engine is home to some notorious figures; garden gnomes, dancing sunflowers and all the tools you need to unearth a great big win. A jolly soundtrack plays out as you work your way to some terrific features, but if you’d rather not have it as a distraction, you could always reach for the mute button. There are ten-win lines in which a win can be produced and exploding wilds will drop in every now and again to ensure you get a win.

Mat Ingram, CPO at Reflex, said: “Moley Moolah is a game that brings together all the elements of game design we truly enjoy in one fun-filled package. With the focal character helping out when he can, players will be joining him on his digs as often as possible! As a YG Masters program member we get to enjoy numerous benefits while being able to focus on what we do best, design games. This has allowed us to really flourish and we look forward to releasing many more games in the future.”

When the free games feature is awarded…

…15 bonus spins are credited at the same level as your base game bet. The aim of the game here is to gather as many acorn symbols as you can over your free play session; five sees an additional 5x3 reel engine brought into play and there’s the potential to play with four different sets of slot machines during this feature, something which we’ve only seen on ‘Big Bet’ Rainbow Riches titles until now!

And, on top of this, the random reels feature can kick in too! Watch as the mole randomly appears to cause a quake, turning symbols wilds as a result! Oh, and did I forget to say it’s a win-both-ways reel engine? Silly me!

Sounds so much fun! And four games in one too!