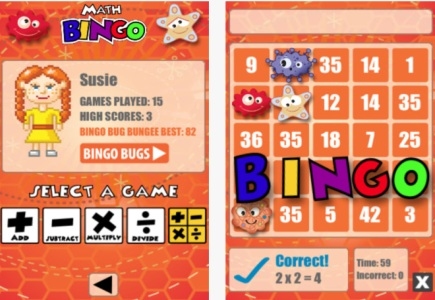 With the latest educational bingo application to hit the market, you don't have to be at least 18 years old to play. This month Math Bingo launches for iPhone, iPad and Android. ABCya.com has created a fun and exciting way to teach young children the basics of math in combination with bingo.

Math Bingo is basically a combination of mathematics, recurrence and bingo. Children are given 25 questions to answer while being timed. A timer is placed at the bottom of the screen and will remain until the all the question are answered. The questions are actually math equations to be solved. Addition, subtraction, multiplication, division or a combination of the four is incorporated into the app. Parents have the option to set the degree of difficulty based on their child's skills.

Cute creatures have been added to the design and fill the space on the bingo card when a problem is solved. In addition to Math Bingo, other games are also included such as Bug Bungee and Bingo Bugs. Solving math equations is hard work but it doesn't have to be boring.