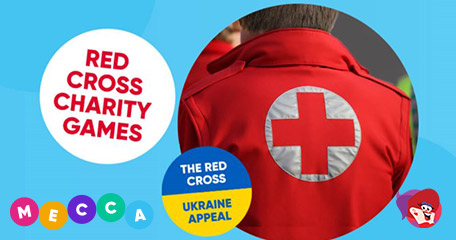 There is a huge humanitarian crisis facing the people of Ukraine at this very moment in time, with some 4.4million people affected. The latest figures suggest more than 1.8million people have fled their homes to neighbouring countries since the Russian invasion on February 24th. It’s estimated more than 3.4million of those are in desperate need of humanitarian assistance and thanks to the generosity of the public from all over the world, those who are in need are getting help.

Organisations and charities have set up special funds to help in this time of need including Save the Children and the British Red Cross, who alone have provided 15,000 litres of drinking water to villages in eastern Ukraine in the past few days alone.

…this way the online bingo community can support The Red Cross and play the brilliant bingo games they love and win the same prizes at the same time. Up until March 31st, charity bingo games will run at 12:15pm, 3:15pm and 7:15pm Monday to Saturday with hourly games scheduled from 8:15am to 11:15pm on a Sunday.

Head on over to the Two Little Ducks, Main Event, Penny Lane, Rollercoaster and Lucky for Some bingo rooms to join in with the fun. It may be the same rooms, same times and same prizes, but by taking part you will bemaking a big difference to the people of Ukraine. Bingo tickets will set you back just 15p each with a total game prize fund of £150 up for grabs.

In other news, to celebrate the start of Crufts Week, Mecca Bingo are on the hunt for the cutest dog, funniest dog, cheesiest grin, best dressed god and the most awkward sleeper. You can submit as many pictures of your furry friend as you like, but you need to make it clear which category you are entering for each submission.

Three finalist from each category will be chosen to go head-to-head in a public vote. Five winners will be chosen on March 12th to win a prize, although it doesn’t actually say what you can win. To submit your pictures, head over to your local Mecca Bingo page or the main Mecca Bingo Facebook page.

There’s still time to enter the £1million slots giveaway where 60,000 prizes will be won! Cash with no wagering requirements and bonus spins will be won every week this month and getting your name into the draw is as simple as wagering £10 on selected casino games. This week, earn double the entries when you play bouncy Balls 2 JP! Remaining draws, qualifying games and prizes are as follows:

I see they are having issues with the daily free wheel again. I can’t play and a lot of others (on Facebook) can’t either.