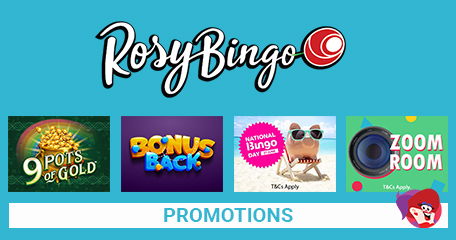 June has arrived and along with it the rain, wind and thunderstorms! What ever happened to the saying ‘flaming June’? The Queen’s Platinum Jubilee celebrations went without a hitch with wall-to-wall sunshine on both bank holiday days, but as soon as the bunting has been folded away (for another seventy years!), mother nature decides to unleash fury on the nation. Temperatures have plummeted in my little corner of Wales from 22 degrees to just 10!

Thankfully I have a series of brilliant online bingo promotions to tell you about, which should keep my hands warm for a while. A new month means new promotions and Rosy Bingo are inviting you to take part in a week-long celebration to mark National Bingo Day. The annual event may kick off on Monday 27th of June, but from Monday 20th, you can play penny bingo games to win a share of £100 in cash!

Every day between the 20th and the 27th of this month they have special £100 bingo games twice an hour, each guaranteeing three prizes: £10 for the one-line, £20 for the two lines and £70 for a full house. These games are linked games played in the 'National Bingo Day' bingo room and 'The Jackpot' room between 4:30pm and 10:30pm. A pre-buy option is available. If you win, you’ll be credited with real money with no wagering requirements attached.

Other Fun-Filled Promotions (and Offers)

A bigger, better bingo game is scheduled for Saturday July 2nd with £5K up for grabs. Tickets cost just 30p with £2,500 going to the one-line, two lines and full house winner and the remaining £2,500 going to all players in the game. The prize breakdown sees prizes of £500, £750 and £1,250 up for grabs, providing you can dab those numbers before anyone else! Even if you don’t win one of the bigger prizes you are guaranteed to get a share of that runner’s up pot.

The Drop Pots bingo room is proving to be a popular Rosy Bingo feature with its three jackpots featuring nothing but real money winnings! There are multiple chances to win a jackpot throughout the day with very reasonable ticket prices. Of the three jackpots, one is guaranteed to be won daily. Mini, Midi and Maxi. It’s a new bingo experience with massive excitement!

Don’t forget to check those daily bingo deals! On a Monday you can get bonus spins on one of Microgaming’s most popular titles, on a Tuesday it’s bingo bonus time and on a Thursday you can claim a bonus back on losses!

I love how you can pre-buy into the games here are Rosy Bingo. I often forget about promotions so buying in advance means I can win even if I forget about the games.

I love how you can pre-buy into the games here are Rosy Bingo. I often forget about promotions so buying in advance means I can win even if I forget about the games.