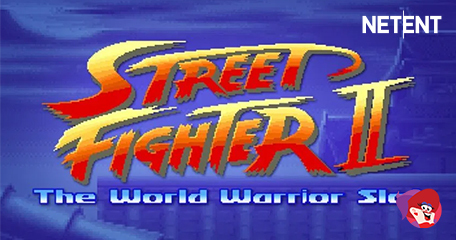 Old school gamers will understand just how difficult it was to unleash fury on their enemies in Street Fighter II. Before the video games console industry took off, all we had was the iconic Super Nintendo SNES system – an extremely basic console but fun, nonetheless.

Challengers would go head to head in the gritty backstreets of Asia in an attempt to KO their opponent. As fun as it was back in the 90’s, it never managed to survive modern technology. Retro gamers like myself still have access to the iconic game, but many don’t, however, this is set to change…

…Thanks to a major deal between NetEnt and Capcom, online casino enthusiasts will soon be able to showcase their moves via an extremely sophisticated video slot.

It won’t be long before one of the world’s best-selling arcade games of all time will be transformed into slot entertainment. The upcoming Street Fighter II: The world Warrior Slot will be the latest addition to the award-winning software providers portfolio in this year.

Created by Capcom, the leading worldwide developer and publisher of video games, Street Fighter II: The World Warrior will boast genre-defying graphics, an impressive soundtrack as well as gameplay plus iconic characters from the game; Ryu, Ken, E. Honda, Guile, Chun-Li, Blanka, Zangief and Dhalsim – as well as boss fights with Balrog, Vega, Sagat and the truly evil M. Bison.

NetEnt are hoping that the record-breaking success of the video game will be mirrored in their upcoming casino game. And, we won’t have long to wait to see it, what with it scheduled for release on May 21st!

Bryan Upton, NetEnt Director of Games said: “The release of Street Fighter II: The World Warrior took the arcade world by storm in the early nineties and today it is widely considered as the ultimate classic video game that continues to entertain fans almost 30 years later.

At NetEnt, we strive to deliver content that – much like Street Fighter – raises the bar in what is possible in gaming and we are immensely proud to be working with such an iconic franchise especially something in tune with the retro trends right now. It is a dream come true to work on brands like these. Street Fighter II really allows us to bring something new and innovative to the market that no one else can.”

Surprised by the news? We are too, but this isn’t the first video game to become the setting for an online slot. We have King Kong Cash and Return of Kong Megaways – both boasting full on swinging fun and both loosely based on Nintendo’s Donkey Kong.

What next? Sonic the Hedgehog? Mario Karts? How fun would that be!

Wow! I wondered how long it would be before we started seeing retro video games on the reels. You can’t beat old school games. I still have the SNES with Super Mario...

Wow! I wondered how long it would be before we started seeing retro video games on the reels. You can’t beat old school games. I still have the SNES with Super Mario Bros and Yoshi. Totally different style of gaming to today’s market.