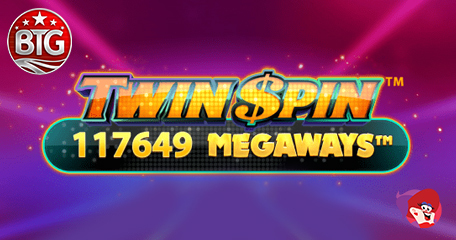 Can you believe it’s been almost 7-years since the revolutionary Twin Spin slot game was released? The game where as many as 5-reels can sync randomly on any spin to produce colossal pay-outs. Well now the team behind the edge of your seat title are back only this time, they’re delivering way more ways to win, many more cash prizes and much more fun in Twin Spin Megaways!

Megaways slots themselves are super exciting with huge win potential but add to that a syncing reel mechanism and bonus spins and you’re guaranteed heaps of fun! Boasting a 6-reel engine, cascading symbols, wilds, bonus spins with an unlimited win multiplier and a random sync of the reels makes this particular slot extremely popular!

Just how new is it? I only stumbled on it…

…last night when playing over at Coral Bingo and I had just what you could call a little bit of luck on it. When it comes to stakes, I never like to spend more than 60p, I’m what you call a conservative player; look after the pennies and the pounds will build themselves! After launching the sequel to the Twin Spin release, I managed to spin in a win of more than £500 all thanks to those red hot seven symbols! All the iconic symbols from the original title can be found sewn into the reels, along with a new one – a game logo symbol; this just happens to be your scatter symbol.

Two or more adjacent reels are randomly chosen at the start of each spin and will be highlighted in a golden red shimmer; these will be two identical reels, hence NetEnt naming the game as ‘Twin Spin.’ Synced reels are linked together for the duration of the spin. This is a feature that can kick in on every spin in both the base game and the free games feature. The great thing about this casino game feature is that all 6 reels can become synced and this means producing identical results for huge win potential!

Each win will cause an avalanche whereby winning symbols will be removed to make way for new ones, I’m sure you’ve witnessed this before in other Megaways slots. Wild symbols have an important role to fill; create wins where they may have been missed, but they also have an additional role; to multiply your winnings! Keep your eyes peeled for the multiplier wilds who have the potential to boost the value of your wins by up to 3x per wild symbol!

Five game logo scatters will award 15 free games with the revolutionary increasing multiplier, but that won’t be easy! Each win will see that multiplier rise by 1x, so three consecutive wins in one spin will hike the value of that multiplier up to 4x for your next win! This system in itself has the potential to award wins of up to 38,000x – which is epic for any level of bet!

Love playing Twin Spin even to this day, so I’ll have to give this one a try!