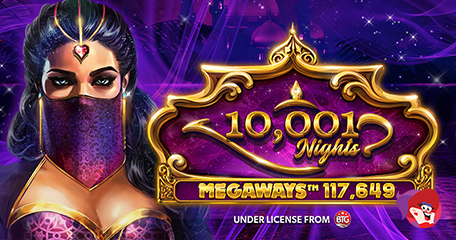 10,001 Nights Megaways is making its debut two years after 10,001 Nights hit the online gaming scene, complete with even more ways to win per spin than ever before. An exciting new Arabian dream continues with progressive features to keep players entertained from their very first spin to their last. Land those mystical oil lamps to fill the lamps with oil and when full, each lamp has its own unique modifier for a shot at mega payouts.

Nine lamps is all it takes to unlock the mega wild feature, and that may not take too long at all when you consider each of the 6-reels has up to 7 symbols in every spin. Mega wilds can appear on the middle four reels and will cover the entire reel, bringing with them a multiplier of between 2x and 7x. Those multipliers increase even further during the bonus spins round!

James Jones, Head of Business Development at Evolution said: “Players are going to be transported back to Old Arabia with this brand new 10,001 Nights Megaways™ game. The graphics are stunning and the team have truly created a decadent atmosphere that’s going to hook players right from the word go. Genie lamps, jewels, rich colours and the Sultan himself all contribute to the sights and sounds of the thrilling tale of Scheherazade.”

The latest Red Tiger release is available to play at Peachy Games where there are jackpots guaranteed to be won every 10-minutes! That’s right! By playing 10,001 Nights Megaways, you have a chance to win a jackpot every 10-minutes, the countdown timer and value of the jackpot will be displayed on your screen at all times. Three jackpot symbols guarantees you either the 10-minute jackpot, the daily drop or the super drop.

Other new games to play at Peachy Games this week include