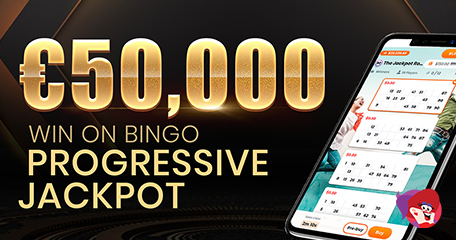 Two pieces of news to bring you from Pragmatic Play HQ today, the first being an epic bingo winner and a new slot release. Bingo jackpots are super popular as they offer the chance to win substantial sums of money in addition to the full house prizes, but winning one is easier said than done. Not only do you need to beat every other ticketholder to win the full house, but you need to do it within a specific number of balls… and that’s exactly what one lucky dabber did recently!

They may be famed for their slots and ‘drops & wins’ tourneys, but that hasn’t stopped Pragmatic Play becoming one of the leaders in online bingo software since launching their very first bingo client back in 2018, and now it’s easy to see why, what with offering an innovative bingo lobby with a simple, easy to comprehend ticket feature, extra prizes on each ticket as well as more bingo patterns in 5-line games than any other operator!

The lucky player was dabbing away over at Princess Casino, who only just recently added the bingo client to their platform, when all of its numbers seemed to come out at once, and the result was marking a full ticket of 15 numbers within the set number of calls to walk away with €50,811.57!

Claire McDaid, Vice President of Bingo Operations at Pragmatic Play, said: “We are so pleased to hear about this win! The Jackpot Room does exactly as you would expect, offering big non-stop progressive jackpots and huge game pots totalling well over €300k a month in guaranteed prizes alone. This win is truly spectacular for the player, and we extend our warmest congratulations to them, and hope they enjoy their winnings.”

New Game and an Upcoming Variant

Pragmatic Play have gone all Mexican in their latest release to feature the Megaways reel mechanic, and it can only mean one thing…red-hot prizes and tasty features! Chilli Heat Megaways is the sequel to the Chilli Heat smash-hit, with 6-reels, up to 117,649 ways to win and a (free) cash re-spin and win bonus! Six or more money bag icons appearing in view will instantly launch the bonus round. All cash value bags will remain locked in place as a re-spin is awarded. More bags with cash mean more re-spins, as the re-spin meter resets to its maximum (of 3) each time.

Additional elements include a double chance to win feature as well as 7 different extras within the re-spin bonus, which include:

Keep your eyes peels over at the likes of…

…Play OJO Bingo, as rumour has it a new bingo game is about to be launched! ‘Reels Room’ is said to be a new slot feature room where you can play bingo to win bonus spins! The new feature will result in being able to play free slots with your prize winnings, and all winnings will be wager-free!

Can’t wait for the spins bingo room! I only wish more operators offered this type of room. I gather it will be a room where you win spins for Pragmatic titles…which...

Can’t wait for the spins bingo room! I only wish more operators offered this type of room. I gather it will be a room where you win spins for Pragmatic titles…which is okay because they have lots of fun slots with exciting features.