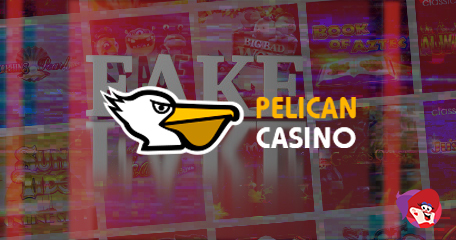 Pelican Casino is in the spotlight this month, but for all the wrong reasons! Players could be forgiven for thinking the online gaming operator is anything but reputable, what with brandishing the pelican logo; the national bird of several countries and the state bird of Louisiana, the symbol usually reflects all the good qualities of the gregarious bird…

…responsibility, reliability, friendliness and generosity, but this online venue is anything but, and as a result of going rogue, they now find themselves in a bit of a flap.

LCB, our sister site, and independent directory/reviewer of online casinos has a nose for sniffing out rogue casinos and not too long ago, they got a whiff of something being amiss over at Pelican. It wasn’t long before the team were eyes deep in accusations of ripping off providers and this meant…

…the offering of fake games to players! Pelicans are often persecuted by anglers who deem them to be competition and as a result, their population shrinks. However, one thing will never subside and that is LCB’s attitude towards rogue casinos who throw out pirated games, flaunt online jurisdictions, turn a blind eye to player safety and give the fairness of gambling the heave ho.

We can only hope the conclusion to this awful mess will be a complete overhaul to the way this online venue operates. However, it’s looking highly unlikely after a total of 11 top-tier software providers were mimicked as being genuine, but in reality, they were fake! This means no matter how much money users have or how long they spin the reels; the prizes will never come. The list of software developers ripped off were:

According to the operator’s website, they are licensed to offer gambling services by Cyberluck (1668/JAZ), one of the largest Master License holders in this Caribbean country, a country awash with poor reputation, lack of transparency and countless occasions in which casinos have been caught offering fake games.

All operators must bear the validation stamp on their website; CIGA (Curaçao Internet Gaming Association); no stamp, no play – it’s simple! Pelican is one of those with no validation stamp and this means it’s a no-go area!

Residents of the United States, Turkey and Cyprus are not permitted to play at the casino, so what happened when the investigation team logged in from those areas? They found there were no blocks to stop them from making a deposit and playing the online casino games.

One major alarm bell for the LCB team was the fact that the site was offering Aristocrat and Novomatic software.

What’s wrong with that you ask? Well, online casinos licensed by Curacao cannot offer this software, which was a definite sign that the site was up to no good! Every one of the fake games looked the real deal, until it came to the Novomatic titles which stood out like a sore thumb.

In an age where iGaming legislation and gambling regulation is the tightest it’s ever been, it’s shocking that these online rogue casinos are still popping up. LCB have vowed never to give up on sniffing out the operators who go rogue and will throw them into the wolves until something is done about them!

Bingo Warnings Back to articles