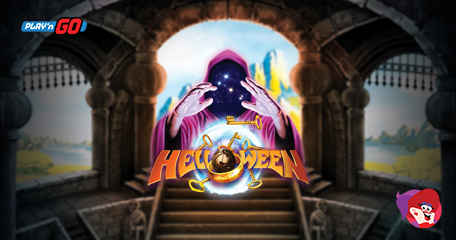 Remember that commitment Play’n GO made back in January 2020 to release 52 new gaming titles for 2020? Well, we’re approaching week 43 and it would seem they’re still behind schedule, but not by much as we take a look at slot release 39 of 52! ‘Tis the season to be spooky and what better way to deliver spine-tingling thrills than playing something new, and you can do just that with the new fun-filled Helloween release.

This new 5-reel slot offers a ghoulish theme with a rock ‘n’ roll feel, courtesy of a soundtrack supplied by none other the Helloween; the German power metal band! ‘Keeper of the Seven Keys Part 1’ and ‘Keeper of the Seven Keys Part 2’ songs have been taken straight from their pivotal album and packed into the new 5-reel engine to deliver an exceptional gaming experience.

It’s not the first time…

…we’ve seen Play’n GO team up with some famous bands; Twisted Sister and Saxon are already on the casino scene so too is Annihilator, Demon, Black Mamba and the dark Sabaton release! Each rock-themed slot is packed with thrills and cash spills, but none as thrilling as the new Helloween title! Why’s that you ask? Packed into the 5x3 reel engine are no less than 7 wilds and each one has the power to unlock a win of up to 5,000x your stake!

The key to huge wins hides within the keys (obviously!) and once triggered, a satanic golden star will spin to reveal your fate of five free games with one of the following slot features:


Helloween free games awards 7 additional bonus spins each time a trio of new key scatters are gathered. Any of the features mentioned above can grant a multiplier of up to 10x; keep your eyes on the golden ring and pumpkin to the top of the screen for this to come into play. There are no less than 7 wilds; 6 pumpkins and those key scatters, all of which can produce soul-crushing wins if the reels fall right for you!

Never been a fan of rock music but the combination of rock and Halloween could actually work. Seven different wilds sound promising. Can’t wait to give it a try!

Never been a fan of rock music but the combination of rock and Halloween could actually work. Seven different wilds sound promising. Can’t wait to give it a try!