Something New is Forming at Tombola & It’s Free to Play 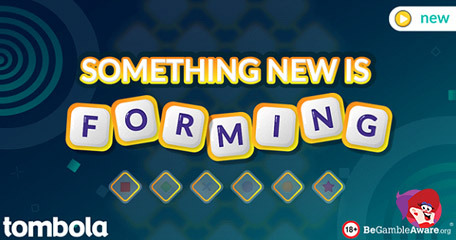 Here we go again LBB’ers! Tombola have dropped the biggest hint yet that they’re about to pull the plug on their Vibes game, and I for one can’t wait to witness it in action! Don’t get me wrong, Vibes is a great concept with multiple winners taking home a share of a £40K prize pool every week, but as one of the multiple thousands or possibly even millions of people who hasn’t won a single penny, I have to admit I’m not its biggest fan.

Taking to Facebook, Tombola posted an image of a new and exclusive game preview and instantly the community was intrigued. Almost all comments were in relation to Vibes with more than just a handful of players complaining at the lack of wins…

… “Hope it's replacing vibes whatever it is,” “Hopefully it will be replacing vibes, hard to win on there” and “Take vibes off can never win on there” were the first comments to appear beneath the image. It’s safe to say there are a lot of unhappy Vibes players on social media.

Other than the image we know nothing of the new game other than it is totally free to play and this means no risk to your cash. Naturally, in order to play one has to be a Tombola member and must have made at least one deposit since registration. Many are taking guesses as to what the game could involve and of all the theories I am going with a Scrabble type theme. Will it be match the words to win prizes or more of a Lingo type of game where you guess the words to win? Who knows! But what we do know is players will be able to play for free twice a day, once on Tombola and once on Arcade.

On Monday 13th the following message appeared on the bingo site: “Something new is forming here on Tombola and there’s going to be EVEN MORE chances to win than EVER before! Keep your eyes peeled for a brand new free to play daily game joining Tombola bingo soon.”

They had me at “even more chances to win.” What do you make of the daily free-to-play games at Tombola? Which one has been your favourite and which one has been your idea of a nightmare? I vividly remember one styled very in a Guess Who fashion with multiple characters and multiple ways to win. I was lucky on that one and won £50. But in almost 18-years of playing the daily free games, I have won two prizes - £50 more than 10-years ago and £2 in 2020. Maybe this new game will be lucky for me!

Hopefully it’s better than Vibes, can’t win a thing on that and a lot of others can’t either. Must be the only daily free game I know from Tombola with very limited...

Hopefully it’s better than Vibes, can’t win a thing on that and a lot of others can’t either. Must be the only daily free game I know from Tombola with very limited winners. Why not make that £2 bonus a bonus of £1 and have more winners?