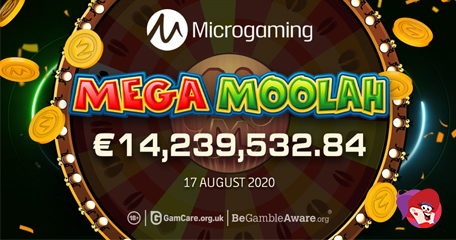 August 17th, 2020 is the date that one lucky Swede is never going to forget and it’s for all the right reasons! Microgaming have revealed today (20th) that its Mega Moolah progressive jackpot has erupted into one lucky players account and sees them richer to the tune €14,239,532.84! The lucky player from Sweden has not only become an instant multi-millionaire, but they’ve also set the record for the largest-ever Euro win on the popular progressive jackpot slot!

The Microgaming team may want to grab a calculator and update their figures after last week’s figures revealed seven millionaires had been made this year, with over €115 million being paid out across 2,571,389 jackpots! The total lifetime pay outs across the progressive jackpot network had exceeded €1.2 billion as of last week and now, that sum has been boosted by the latest €14,239,532.84 winner!

The Sweden-based player landed the top prize when playing the safari themed release on Lucky Casino, a triumphant win which the casino director at Lucky Casino couldn’t believe! He said: “From everyone at Lucky Casino, it is a historic moment - to be able to call our lucky winner and announce that the third largest euro jackpot win ever in Mega Moolah has gone to one of our customers in Sweden is something we could only dream of.”

Last week’s reported seven millionaires is now eight, all of which have landed huge life-changing wins on Microgaming progressive network of slots; from the Absolootly Mad Mega Moolah title to Major Millions, they’ve all produced big winners! And, it would seem that list of games is about to get a whole lot bigger as the software developer reveals another five cash-packed video slots will soon join the list!

When a new winner is created, the director of games at Microgaming likes to personally congratulate them in a press release; here’s what he had to say on the latest winner:

“Congratulations to Lucky Casino and their player on the tremendous win through Microgaming’s Mega Moolah. The win marks the largest euro jackpot win in Sweden through our progressive jackpot network! Mega Moolah continues to be a favourite among players worldwide, and we are thrilled to add even more progressive games to the jackpot and network this year!”

The ’mega’ jackpot may have dropped, but it’s already surpassed the £2million mark! And with stakes as low as 25p, it’s a popular choice among layers looking to land epic wins! Can you really win millions from low bets? Yes, you can and there have been many instances of this happening!

Crazy cash! Even crazier to think you get it paid as one lump sum after the win is verified! I couldn’t imagine what I’d do if I won so much money!