Testing Slots52: Everything You Need to Know – Including KYC Process 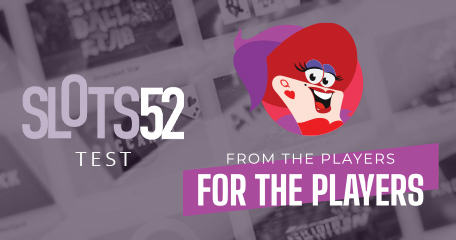 Powered by Jumpman Gaming, Slots52 boasts £6000 welcome offer, on-going casino spin rewards, monthly bingo promotions and even prize draws. Recent giveaways have included prizes such as an 85” TV and designer jewellery. But how do they stack up? We sent in one of our online bingo players to test everything from registration to depositing, games and withdrawal processing. Find out what happened here.

The Slots52 sign-up process was effortless. Registration option 1 requires details to be added manually whereas option 2 imports details from your linked PayPal account. Our reviewer, luckBEEalady opted for the latter. A few seconds later and the welcome offer appeared on screen. 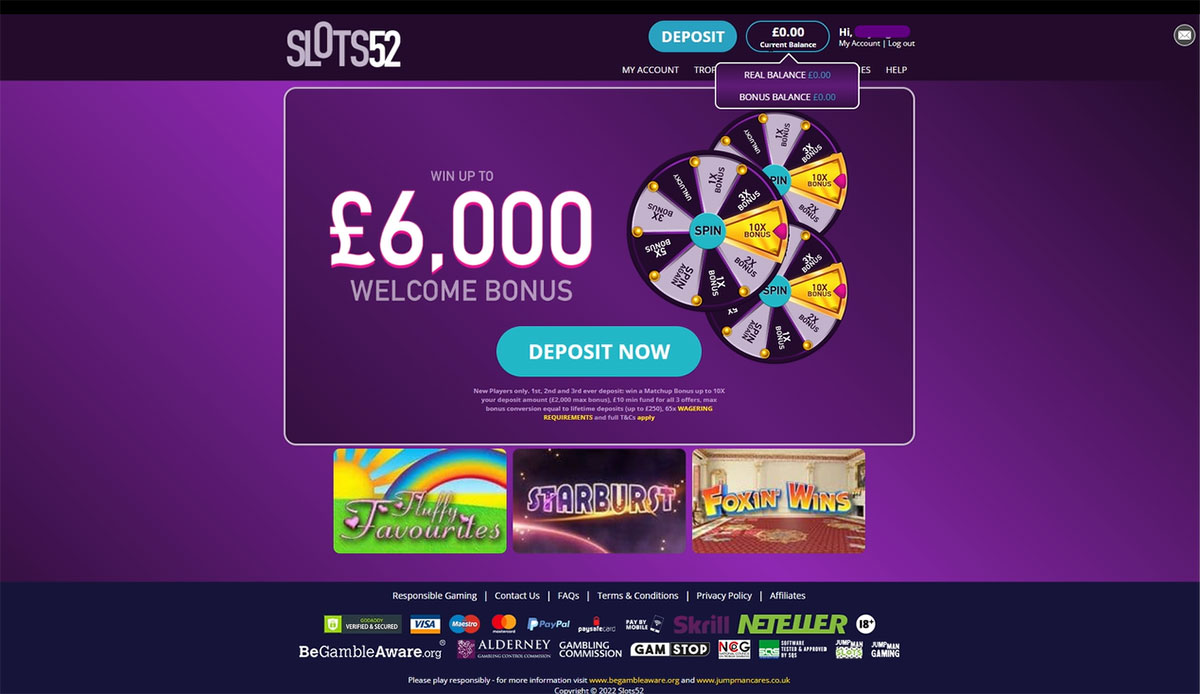 An email indicating the lavish welcome offer of up to £6000 in bonuses pinged into the reviewer’s inbox. Noting the wagering requirements and maximum win limits, the offer was rejected. 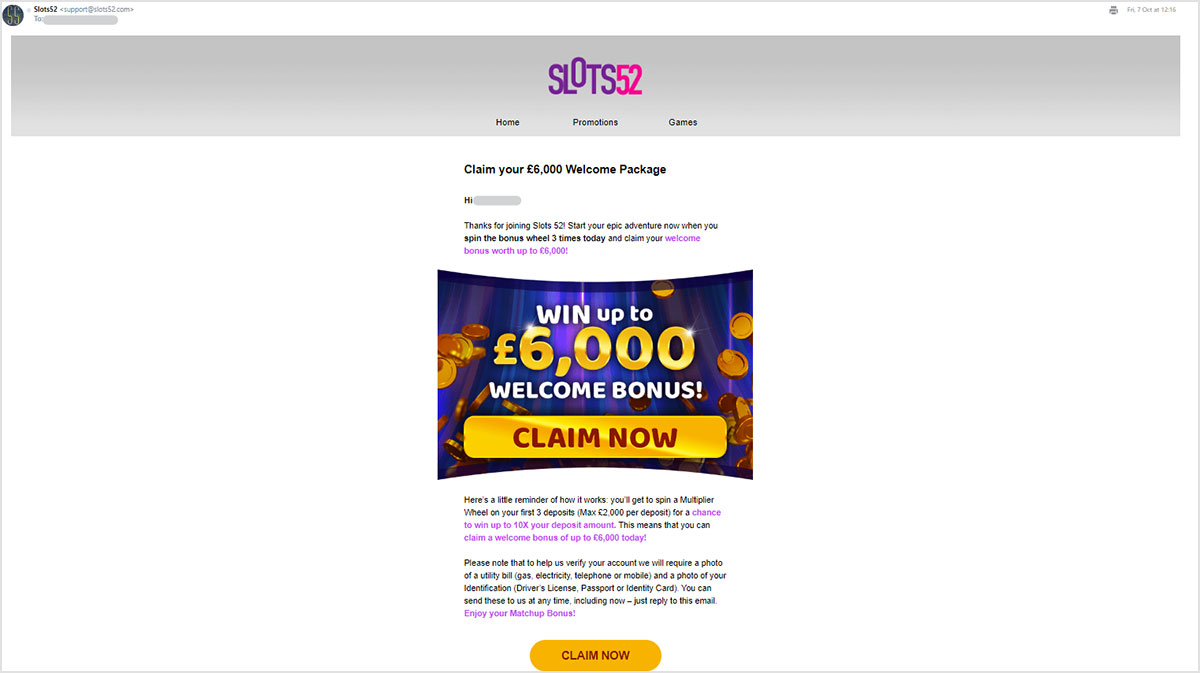 Crediting the account should have been quick and easy. Should have! Adding a payment method to the account was simple enough however, the deposit options were pre-defined to just £10, £20, £50, £100 and £200. 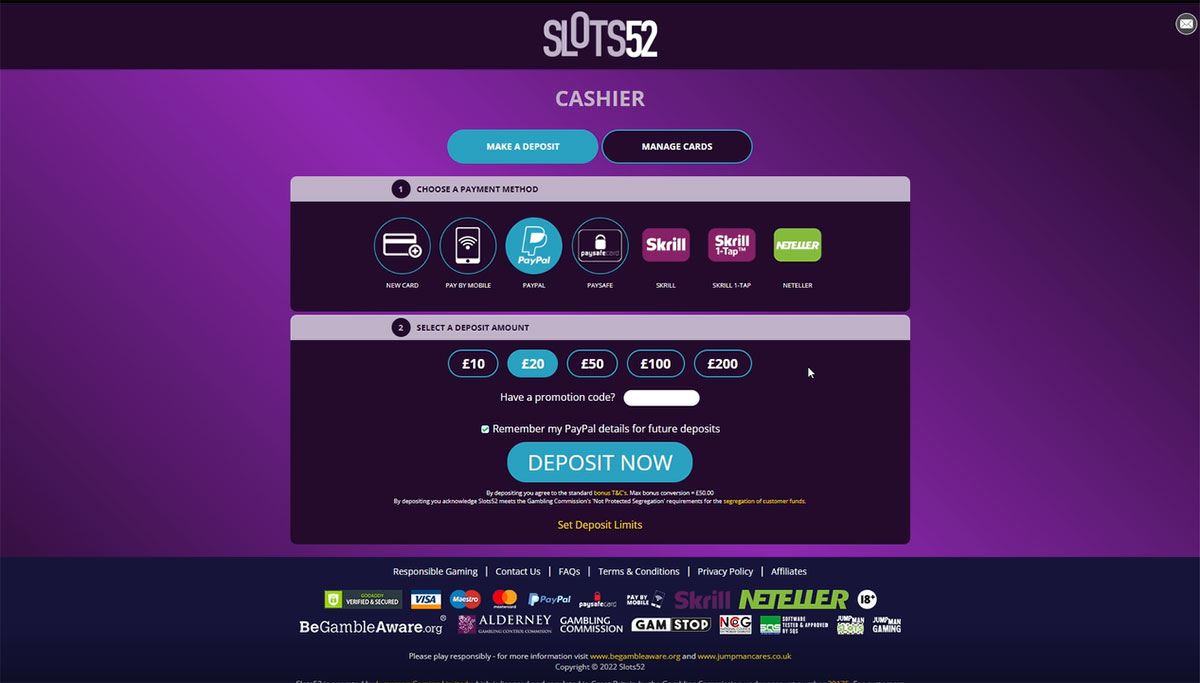 LuckBEEalady intended to fund the account with £150 via PayPal. This had to be done in two transactions, one for £100 and another for £50. After each deposit, a pop-up appeared on-screen inviting her to redeem offers. By avoiding offers, the tester’s balance was excluded from wagering requirements. 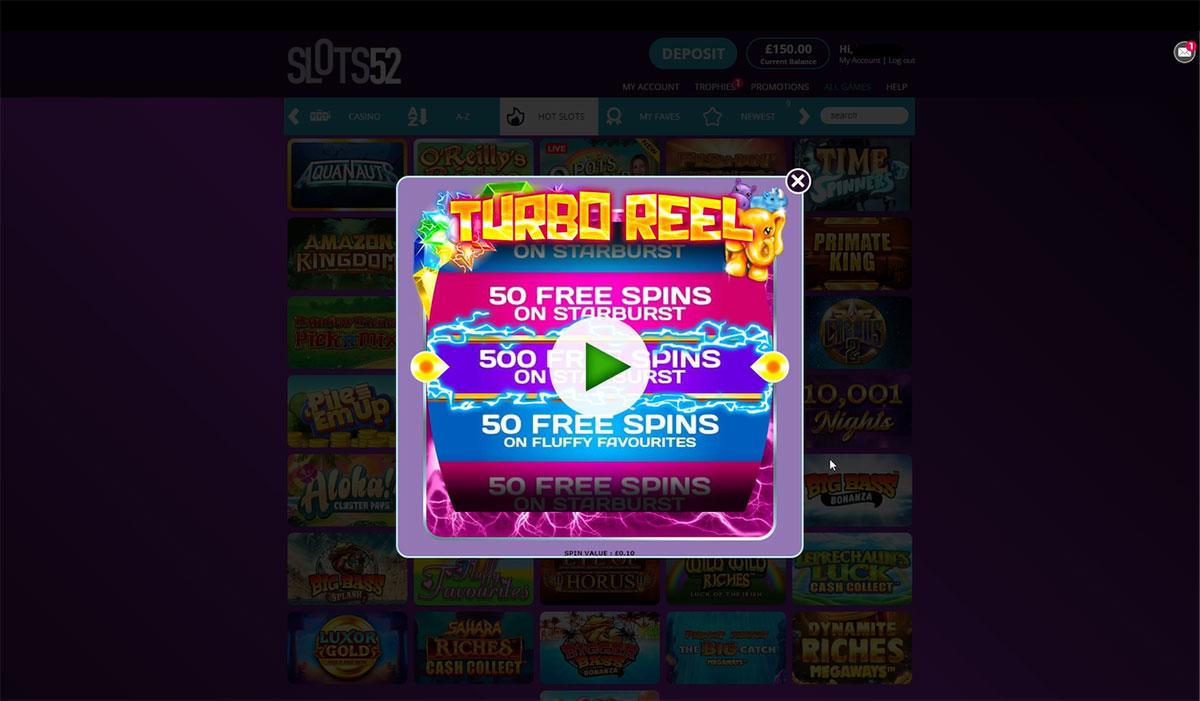 When it came to online bingo, the reviewer headed for games offering a total of 100 chances to win for £1. The Country Roads room hots speed bingo games for 1p a ticket. Side games are provided however, the choice is limited to Pragmatic Play titles. 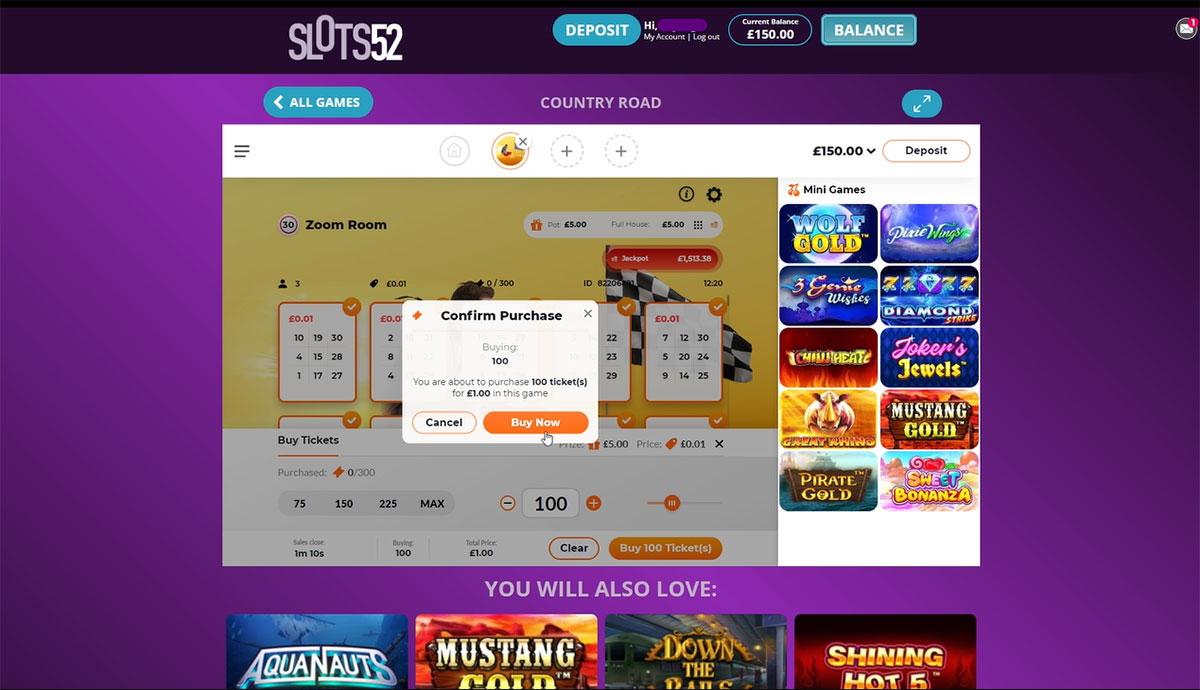 Unique 90-ball bingo fun awaits in the Bingo Blast room, or Pumpkin Blast as it’s known in October. This is the only bingo game of its kind to have just one prize – a full house prize and two explosions of bingo balls! Once ticket sales are closed, a blast of bingo balls takes place. The numbers on those balls are automatically marked off your ticket(s). A second blast commences before the game continues as normal for 4x quicker gameplay on average.

Jackpot 90 features triple chance bingo games with one-line, two lines and a full house in every game. Ticket prices range from 1p to 50p a ticket. Off-peak hours between 10am and 3pm deliver more chances to win and win a jackpot in addition to the other prizes. 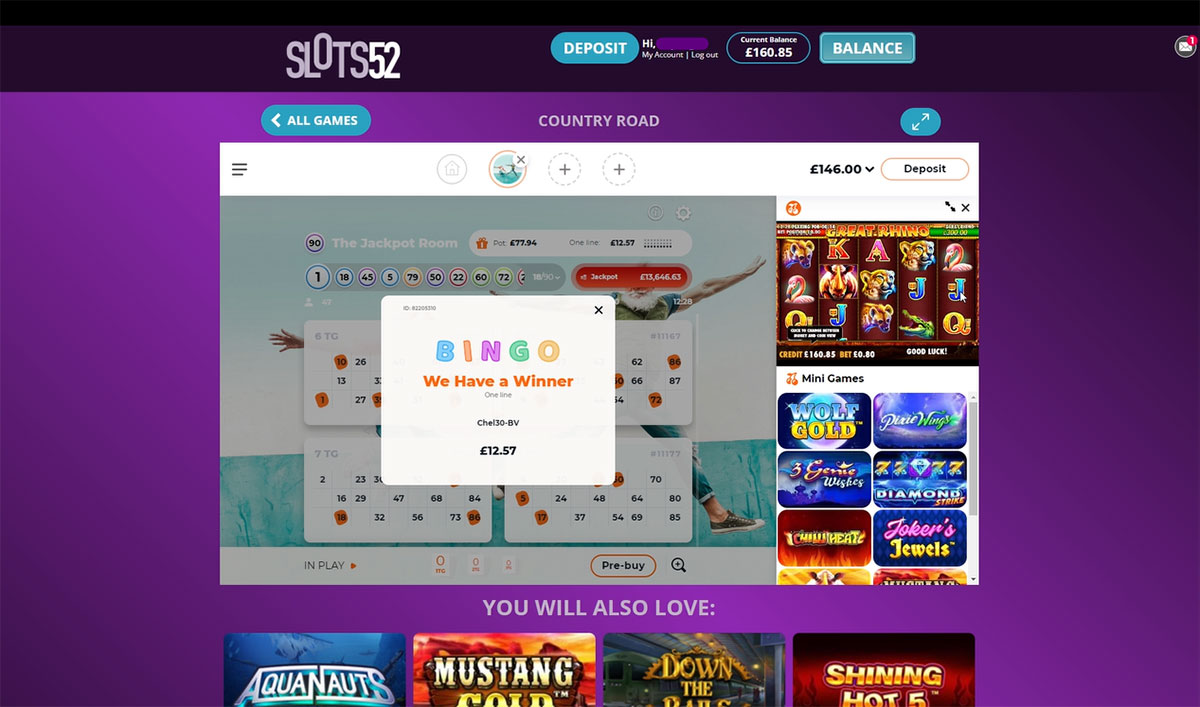 None of the bingo rooms have a chat facility and are all restricted to just 10 side games. A greater choice of online slots can be found via the main games lobby. Including live casino games and the latest 9 Pots of Gold Live! 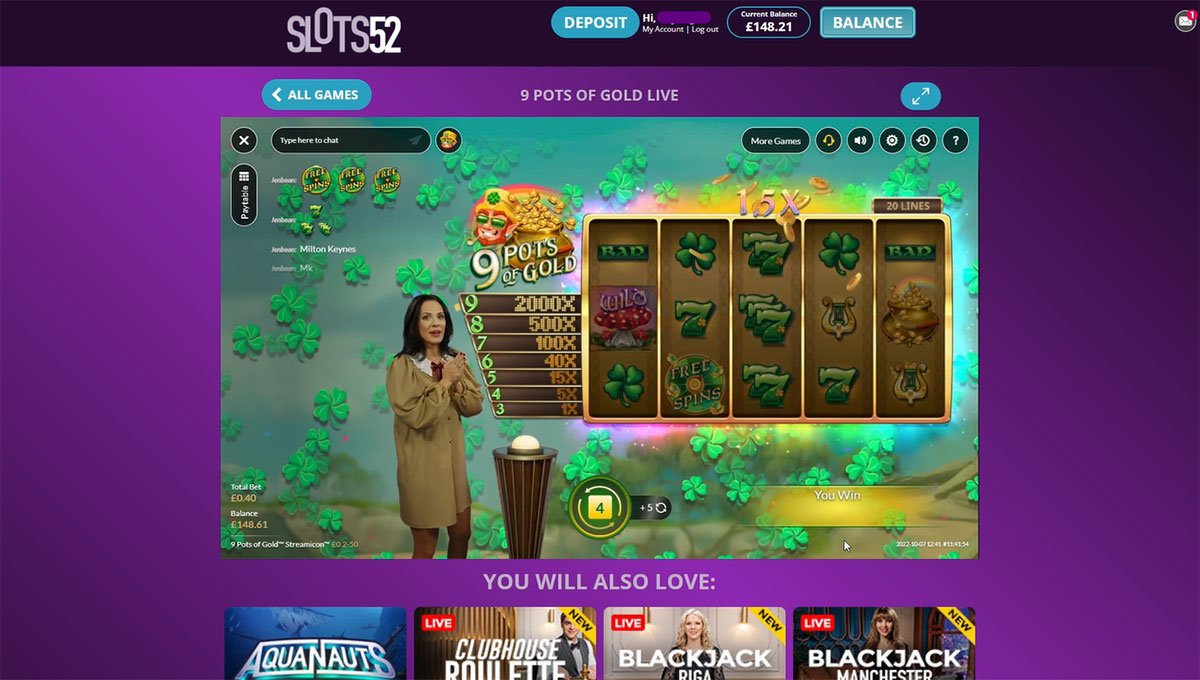 Terms and conditions state additional verification documents “may” be requested once an account has been created, however, the withdrawal function was unavailable until documents were supplied by our reviewer.

A recent utility bill for proof of address, photographic ID (to be uploaded via smartphone) and proof of PayPal ownership was requested and supplied on October 7th. As soon as the documents were uploaded, luckBEEalady requested a withdrawal. The following day her request to cash out £77.83p was rejected, along with her proof of PayPal ownership. Later that day, her recent utility bill was also rejected, despite being dated within the last 3 months. 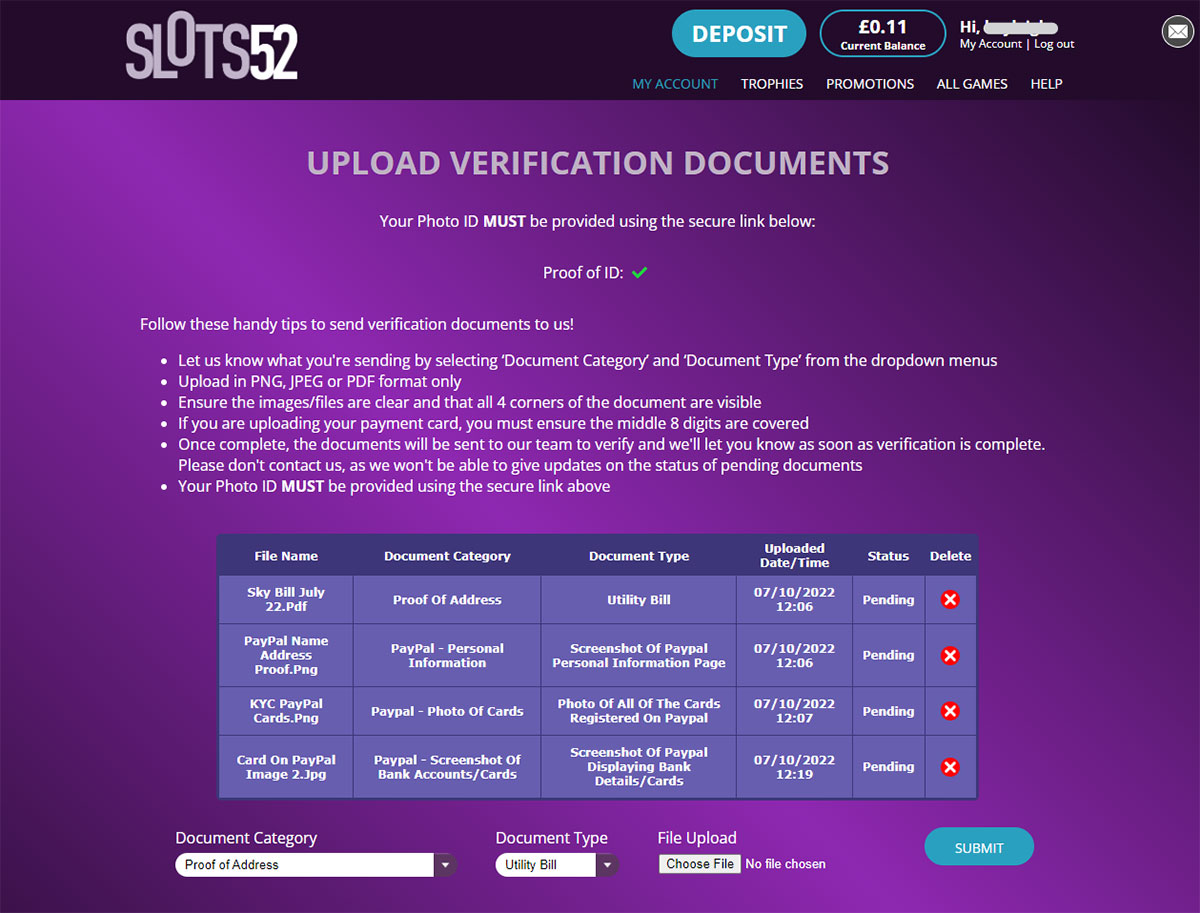 On October 8th, a new utility bill was uploaded along with the same PayPal info that was originally rejected. A new withdrawal request was submitted on this same day. October 9th, withdrawal failed once again. Adding the same utility bill and PayPal screenshot for a third time, the withdrawal was requested once again. 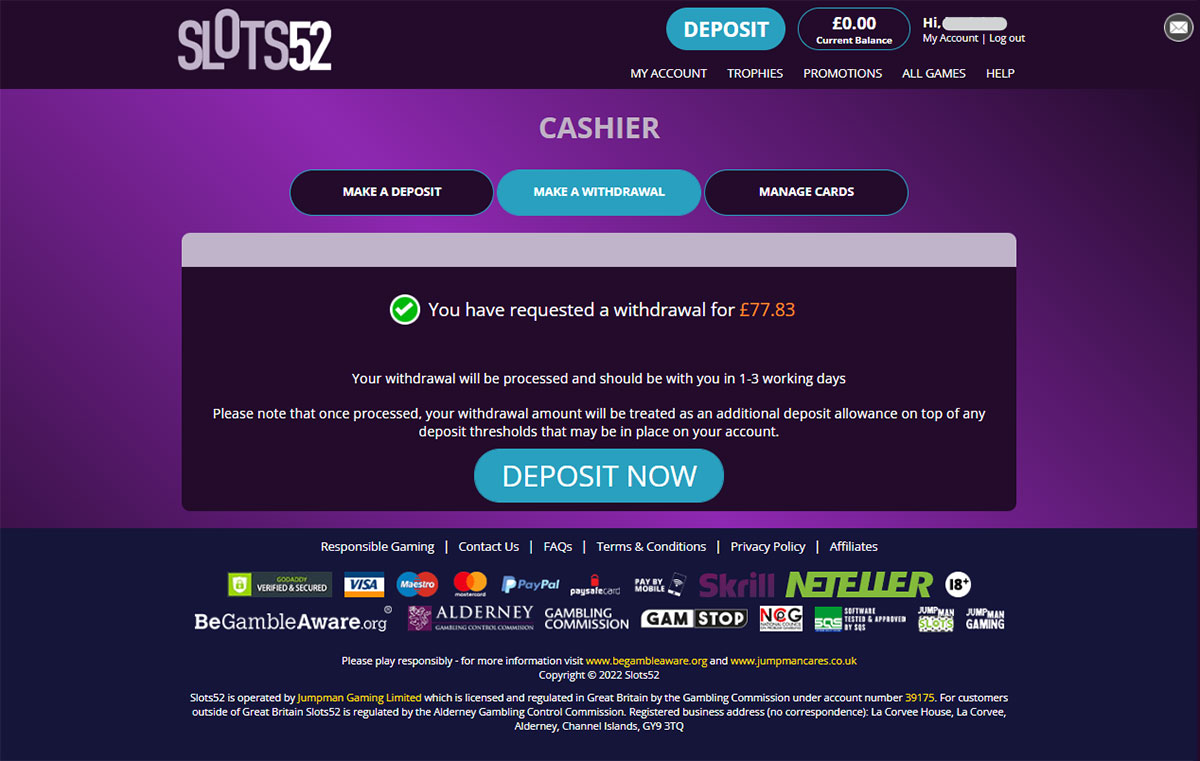 In the meantime an email arrived in the inbox of our reviewer with the latest deposit offers! 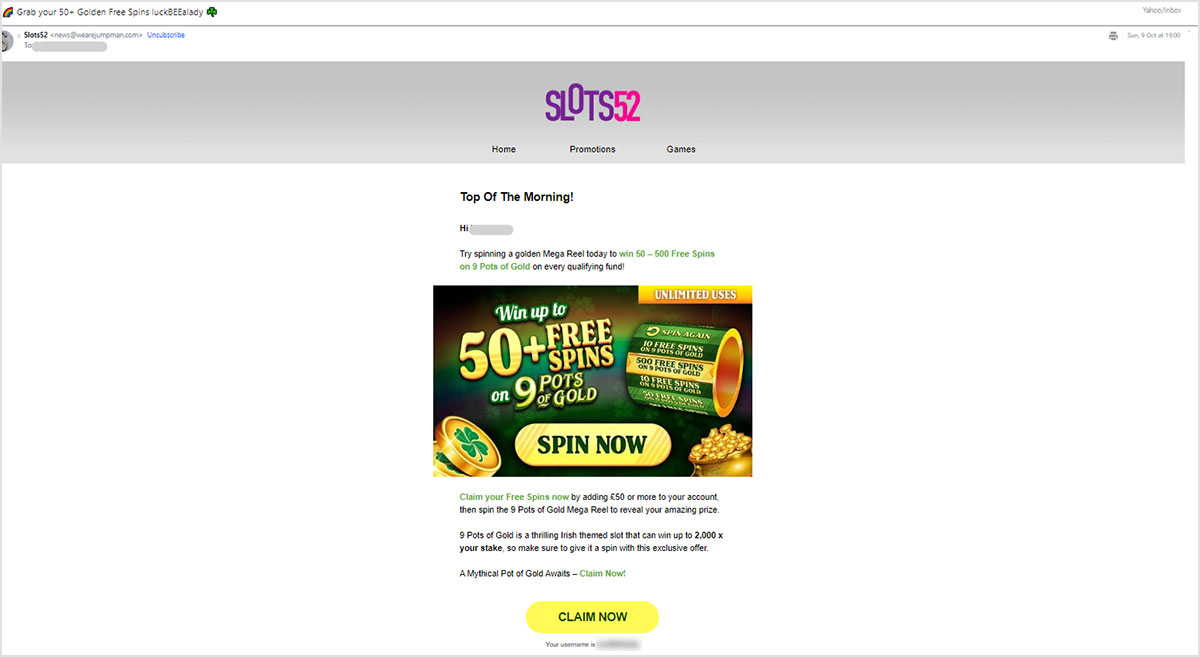 On October 10th, our reviewer logged into her Slots52 account to check on the verification process and discovered her documents were all accepted. Her withdrawal of £77.83p was then authorised and arrived in her PayPal account within an hour, minus the £2.50p fee applied to all cashouts.

How Does Slots52 Stack Up?

Verification is not sometimes required; it is ALWAYS required. The verification process does not run smoothly and seems to be an issue with several Jumpman Gaming sites. The tester’s documents were rejected twice over and later accepted. The silver lining is once the docs have been accepted and verified, withdrawals are processed within the hour via PayPal. It’s also worth reiterating that all withdrawals are subject to a £2.50 fee.

The game selection is quite good. Bingo rooms are provided by Pragmatic Play and side games are limited to this provider as well.

This information concludes this extensive test as part of the project From the Players, For the Players. If you are a member of Slots52 or consider making a deposit, we hope this report provided some useful information.