The Game with No Name Lands at William Hill 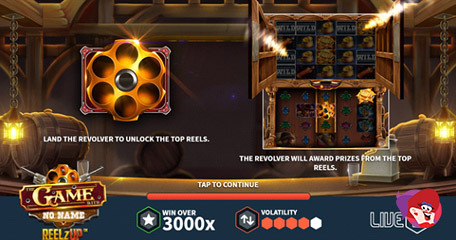 The Game with No Name may seem like a strange title for an online slot machine, well it is, and it’s proving to be every bit as mysterious as it sounds. Boasting the Big Time Gaming Megaways mechanic, this 5-reel slot is reminiscent of the wild west theme, only unlike your traditional Megaways setup, this anonymous invention has one less reel than usual while housing a hidden reel expansion feature for maximum wins and maximum thrills.

Everything You Need to Know

The objective of the new game is to spin the reels to see if the symbols land a win or a bonus. Wilds can assist in creating wins by substituting for all symbols bar scatters. The key symbols to look out for are the revolver and sheriff badge, the former activates the gunslinging bonus round while the latter triggers the bonus spins. Get that revolver symbol to land on the middle reel…

…to witness between 1 and 6 shots being fired, each one revealing a position on the top reel set. There are five different types of symbols hidden on that upper reel, which are as follows:

Three sheriff badges award 8 bonus spins with 2 extra spins awarded per additional scatter symbol. For every subsequent scatter appearing during the feature, one extra spin will be credited.

What do you make of the latest Megaways slot machine? Will you be giving it a try? Available exclusively to William Hill players means unless you’re registered you won’t be able to play. The good news is new players who join, opt-in and stake £10 on Fishin Pots of Gold will receive 100 wager-free spins! All winnings from the free games welcome offer will be credited as real cash with no withdrawal restrictions. Deposits made via an E-Wallet will not be eligible for the bonus.

Sounds different but I’d have liked to have seen something within the spins instead of just spins. The main feature from what I gather is the gunshots. Be interesting...

Sounds different but I’d have liked to have seen something within the spins instead of just spins. The main feature from what I gather is the gunshots. Be interesting to see how often that appears. I probably would give it a go.