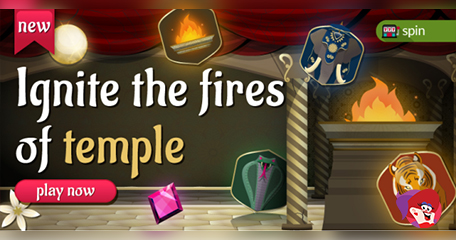 It pays to follow the bingo brands you love on social media; it really does! You get to find out the latest news, winners and promotions before anyone else and you can get involved with some cracking giveaways too! In the last couple of days, Tombola have not only given us all a glimpse of what’s to come over in the Arcade, but have also given away Amazon vouchers, goodie bags and chocolate hampers to registered players who take part in their fun quizzes.

Live video feeds are popular but not as popular as videos of their unique games. From Bubble to Rollercoaster, Scratch to Pulse, each game could find itself part of a fun promo on Facebook, Twitter or Instagram. Get to know your favourite chat hosts, read how to play responsibly, claim or post play mate codes, but most of all, it’s a place you can have fun and meet your fellow Tombola roomies!

New Spin on A Win

Temple is the new Arcade spin game with an RTP of 98.25%. If they take £100 of stakes on average, they will pay out £98.25p in winnings. Styled similar to that of a Megaways slot machine, Temple offers wins when matching symbols fall in any position on consecutive reels. This means symbols do not need to be touching one another for you to win.

In terms of bonuses, players can expect to find wilds as well as free games. Three or more bonus fire symbols will award 10 free games and during the feature, reels can display between 2 and 6 symbols each with at least three of the 5 reels displaying the maximum of 6 symbols per spin. Biggest win potential is via the free games, but don’t expect to trigger them too often, because you’ll be sorely disappointed.

What to the Arcade players make of the new game? ‘Charlie15x’ seems to think when a new game is launched the others stop paying. ‘up4awinplz’ says she really doesn’t like it and ‘moneypit73’ says he never gets the bonus on max stakes. There are plenty in favour of the new game though, including ‘imsunshine’ who managed to trigger the bonus feature four times in just 20 spins!

Remember, next time you play at Tombola, they now offer fast withdrawals https://latestbingobonuses.com/news/are-play-ojo-bingos-instant-withdrawals-fast-find-out-here via Visa Debit – no more having to wait days for your winnings LBB’ers!

I echo the comments of a few people on Facebook – far too many spin games already. ‘Go’ only has one, why not add more there or to the other categories. Spin is...

I echo the comments of a few people on Facebook – far too many spin games already. ‘Go’ only has one, why not add more there or to the other categories. Spin is my downfall that’s why I have the safe play tools in place to block it. I just can’t get any bonuses anymore. Last time I played, I deposited £30, and playing 50p spins, I never had one bonus or one win! How do people win multiple Top Prizes is beyond me? I can’t even win a quid!