Tombola Guarantees Big Cash Promos for 2022 – Are You In? 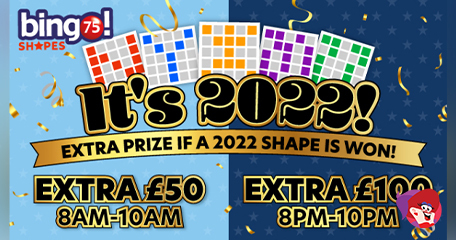 Turn Pennies into Mega Prizes – Someone Has to Win!

Britain’s biggest bingo site are inviting you to not only wave goodbye to 2021, but to wave goodbye with a potential fortune in your pocket, all thanks to the big link week games! They want you to start the year with the biggest and best celebrations possible all thanks to 11 back-to-back link up games on New Year’s Eve! There’s only one place to be this Friday December 31st, and that’s in the bing90 room over at Tombola HQ!

There is one teeny weeny little thing I should point out…

…unlike most other online bingo sites, Tombola doesn’t offer a pre-buy facility, which means you have to be in it to win it! The good news is the big link up games are scheduled to take place between 8:30pm and 9:30pm. What you decide to do after is up to you! How much will it cost you to play? No more than usual!

Whether you’re playing in the rainbow club room or the kaleidoscope club, the bingo tickets will be the same price they always are – 10p each, and nobody can buy more than 4 strips (£2), making these big link games great value for money! A total of £56K will be won in full house prizes alone and that’s £56,000 in real money winnings with no wagering!

A Look at What’s to Come

New Year’s Eve is a snapshot of what’s to come with Tombola guaranteeing big prize money games throughout the month of January, and not just on one room, but multiple rooms. On January 1st and 2nd, to celebrate the arrival of 2022, the bingo75 shapes room will pay extra prizes if a full house is won on a special New Year’s shape. Games commence between 8am and 10am and then again between 8pm and 10pm with an extra £50 to be won in the morning and an extra £100 to be won in the evening.

Anything else? You bet! Two-line Tuesday’s is still very much underway with two-line prizes guaranteed in picture bingo every Tuesday! Instead of playing for just the line and full house, you will be playing for two lines too! There are three rooms to choose from, pirates, circus and mystery. If you see a chat host, don’t be afraid to ask when the next chat game will be getting underway because there’s a maximum of £2 in bonuses to be won every 24-hours! If you win prizes with your chat bonus, there’s no need to panic as winnings won from bonuses are always credited as cash with no wagering!

Keep an eye on the Facebook page too as there are lots of previews, gossip and competitions posted. Oh, one more thing, on Monday 3rd January, a new free-to-play daily game will be revealed (Free Vibes), so make sure you have opted in to play before it goes live! You’ll receive a 4-digit code every Monday for two free daily chances to win big cash! What’s not to love?

Lots of promotions at tombola all the time. I never seem to win much though. I have arcade games set to block because they eat the money really quick and only offer...

Lots of promotions at tombola all the time. I never seem to win much though. I have arcade games set to block because they eat the money really quick and only offer top prizes of £500 for a £1 stake. I’ve won thousands on just a 40p stake elsewhere before, so a little mean in comparison.