Yet Another Absolootly Amazing Win Courtesy of Microgaming 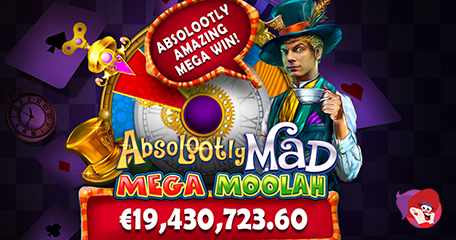 Trio of Jackpots Won in Little Over A Week!

It’s been a mad couple of weeks for Microgaming with no less than three top-tier jackpots being won by lucky slot spinners. First there was a mega win of €17,529,047.11 on April 14th, then a win of €2,025,388.75 just five days later and now we’re hearing of yet another massive, jaw-dropping win - €19,430,723.60 on the Absolootly Mad Mega Moolah slot game, which just happens to be the largest ever jackpot win on Microgaming’s Mega Moolah jackpot network!

Back on April 19th, I brought you news on the Mega Moolah jackpot which was more than £17m back then, with details on how to win and on what slot games, but never in a million years did I expect it to go so soon after posting the details! Previous winners included a lucky Brit, but the latest 8-figure sum to be won goes to a lucky Belgian who was playing the Alice in Wonderland inspired title on April 27th at Napoleon Sports & Casino.

Tim De Borle, CEO at Napoleon Sports & Casino had this to say on the win: “This is a historic day for Napoleon Sports & Casino. We are completely over the moon. The winner of the Mega Moolah jackpot read about our player winning €2 million+ with the WowPot and pursued his own dreams and luck on the other Microgaming jackpot-giant Mega Moolah. It almost feels like our site has become ‘the home of the jackpot’. This record-breaking jackpot is the absolute highlight of the amazing partnership we have with Microgaming.”

As with all Microgaming progressive jackpot titles, all winnings are paid in one lump sum – imagine that hitting your bank! Triple Edge Studios developed the title exclusively for Microgaming with a rabbit hole of potential riches offered to players. What makes this game so popular is the series of bonus features crammed into the 5x3 grid, including cascading symbols, consecutive (increasing) multipliers, free games and that randomly triggered progressive jackpot bonus.

Absolootly Mad Mega Moolah was released a year ago in May 2020, and since it’s launch it has paid out more than 500,000 wins with a total prize pay out of more than €46 million! All-in-all, to date, the Microgaming progressive jackpot network has paid out more than €1.3 billion across all jackpots, tiers and games to date. John Coleman, CEO at Microgaming added his thoughts on the latest win: “We’re absolootly delighted to see Mega Moolah make history once again with its latest record-breaking win, and what an incredible win it is – €19.4 million! That’s the largest jackpot payout in an online slot of all time. Congrats to the player, and well done to Napoleon Sports & Casino on their second Mega jackpot win on our network in as many weeks.”

I was playing Mega Moolah – the original when I noticed the jackpot had reduced to its seed of £2m. Lucky devil to win that, especially at the same casino that triggered...

I was playing Mega Moolah – the original when I noticed the jackpot had reduced to its seed of £2m. Lucky devil to win that, especially at the same casino that triggered a big win just days prior too!