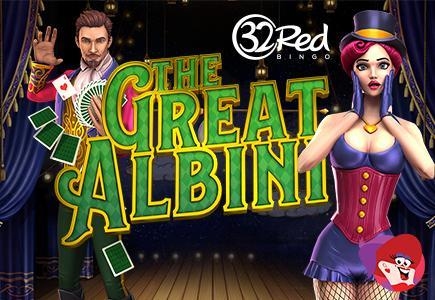 Prepare to be dazzled with the very latest slot from Foxium, the Estonian-based software development company who is taking the slots world by storm! Forget what you think you know about magic, because Albini is here to show you just how remarkable it can be. The Great Albini slot features a magician who performs tricks before your very eyes, which in turn could lead to some exciting bonus features...

...not to mention lucrative wins and now, you can try in demo mode or play for real cash over at 32Red Bingo.

To begin with, players will find waiting centre stage of a grand performance house, a 5-reel, 25-win line engine. Standing to the left of the stage, beneath the luxury velvet curtains is the magician; some would say the star of the show, but we think it's the bonus features that take the spotlight.

As if by magic (pun-intended), the reels will increase to 50 win lines, but only when the bonus spins symbol appears on reels 2, 3 and 4. Twelve bonus spins will be granted and the slot machine will expand, delivering more symbols, more win lines and more chances to win. Now, things get even more interesting when the Lily feature is activated; this can be awarded in the base game and bonus spins round...

...and if you're wondering who this Lily is, she is the glamorous assistant!

When the Lily wild symbol lands on reels 2, 3 or 4 and covers the entire reel, this Lily feature is activated. All wins will be multiplied by 2x but not only that, re-spins will also be triggered. The number of bonus spins remaining has no effect on the re-spin feature. Colossal wins can be achieved during these bonus rounds.

Keep your eyes on that magician because as you play, he will throw stars onto the reels, which could deliver unexpected results. His assistant also performs before your very eyes; I don't mean she's put in a box with swords - she hides in a purple sheet and sometimes appears on the reels as a fully stacked wild!

Terms and conditions apply.
General Gambling News Back to articles

I love magic! Rabbit in the Hat is my favourite, but after reading this, I may have found a new one to play!