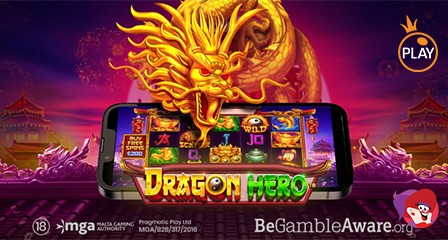 It Looks To Be A Roaring Success!

A taste of the Orient awaits players in Dragon Hero with symbols reflecting the local traditions and beliefs. Mythical dragons swarm the reels, potentially raining a fire of wins in every spin! Should you be lucky enough to summon a dragon (or two!), each symbol will award up to three randomly placed wilds across the reel engine, delivering even more chances to win!

Sights should be set firmly on those scatter symbols with a trio in view awarding at least 6 free games. During the bonus feature, all dragon symbols are locked in their place distributing their wilds continually for each spin, and this only boosts the big win potential.

Irina Cornides, Chief Operating Officer at Pragmatic Play, said: “Dragon Hero™ is a bold and exciting title with every spin in both the base game and free spins round being able to award players multiple wilds, features and super wilds.

Our slot roadmap for this year is set to build on the success of 2022 and players can expect the signature breadth of engaging features, themes and gameplay that Pragmatic Play is synonymous for. We’re excited at the prospect of creating content that encapsulates what it is to be a player favourite that our fans can return to time and again.”

Dragon Hero is available to play at online casino and online bingo websites from January 5th. Play for free with no risk to your cash balance at Play OJO Bingo. Log in and select the game from the library by tapping that “try for free” button, and the slot will launch automatically on your device. Remember, anything won via demo mode is virtual and will not be credited to your account.

New players signing up to Play OJO Bingo get 50 free bingo tickets and 10 bonus spins on just a deposit of £10! Anything won is credited as cash. The no-nonsense, no wagering EVER bingo and casino parlour is packed from floor to ceiling with 100% real money winning opportunities, whether you pay this latest release or something else entirely! Oh, and you get real money cashback withy every bingo ticket purchased and every slot spin too!

Upcoming Pragmatic Play releases to keep an eye on are Wild Wild Bananas on the 9th and Pinup Girls on the 12th.