Microgaming’s October Releases and Not a Pumpkin in Sight? 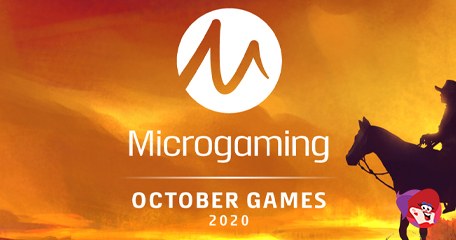 Like most months, Microgaming are set to release a wealth of action-packed titles to its platform this October and if you’re hoping for some Halloween themed action, you’ll be disappointed because none of the slot releases scheduled this month feature a pumpkin, ghost nor ghoul, just frightfully good features!

So, what’s to come this month? Thrilling slots (as always!) and despite each one offering big win potential, none offer wins as big as the WowPot Progressive (the jackpot network which has paid out more than €16 million this year alone), and now the number of games on the network has increased a little more thanks to the arrival of African Legends by Slingshot Studios.

…African Legends takes players on a breath-taking adventure across the African plains where 5-reels and 243 ways to win could land some eye-watering wins! Boasting a cascading reel engine (known as Rolling Reels), players could land multiple wins in a single spin, plus, those wins benefit from a wild blast multiplier trail! Majestic beasts, a stunning scene and jaw-dropping bonus features are now available to be discovered at a casino near you!

And There’s More to Come

October 13th is not a Friday but that doesn’t mean you can’t experience some thrills! Western Gold by JustForTheWin will launch across the Microgaming platform this very day with its high volatility reel engine offering a showdown of bonuses and huge pays. Packing more gunpowder than humanly possible, Western Gold aims to explode catastrophic wins into players bankrolls, especially during the free games feature!

Tarzan and the Jewels of Opar swings onto the casino scene on October 20th with a theme based on that of Edgar Rice Burroughs’ famed 1918 novel – Tarzan. Being the sequel to the original Tarzan means it has a lot to live up to and the bonuses and pays certainly offer that. Your quest is one of untold riches; spin the reels to hunt for the missing precious jewels to win one of many epic escalating scatter-triggered jackpots.

777 Royal Wheel spins onto the online bingo and casino game scene on October 15th with its classic, retro style theme packed with re-spins, wild reels and huge multipliers! Wanted Outlaws lands on October 27th with its gun-wielding Wild West theme and thanks to All41 Studios, there are up to 3,125 ways to win on every spin! Cash bounties of up to 200x your stake is awarded in the bonus spins feature – you just need to hunt them down!

Other titles to come this month include: Aquatic Treasures (by Gold Coin Studios), Fluffy Favourites (by Eyecon), Big Time Gaming’s trio of slots; Royal Mint on October 5th, Chocolates on October 12th (this one is so sweet it’s insane!) and The Final Countdown on 26 October.

Source: “Microgaming Journeys Across African Plains, Through the Wild West and Deep into the Jungle This October”. Microgaming. October 8, 2020.

Unusual not to have a Halloween themed slot game, but then again, they already have games of this genre on offer.