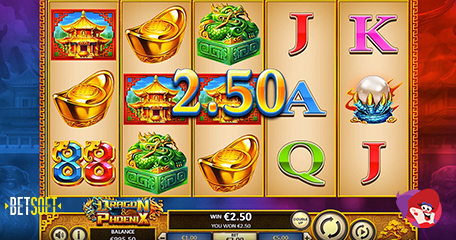 Christmas is not only a time for gifting, over-eating and spending time with family, it’s also a popular season for slot releases and usually, they come with a festive theme. Betsoft is breaking with tradition and shaking up the market with their new Dragon & Phoenix offering and it’s packed with essences of Chinese culture and royalty – there’s not a Christmas tree in sight!

Annamaria Anastasi, Marketing Director, Betsoft Gaming, said: “Dragon & Phoenix is our third release in the Red Dragon Series. This content has been very well received by our players and clients due to its innovation, imagination and high quality. We are renowned for our ability to create and retain player engagement and the huge pay-out potential of Dragon & Phoenix is already creating enormous excitement in the market – as we showed in our pre-launch demos at SiGMA 2019.”

Boasting 5 reels and 20 win lines, this latest casino game release is packed with winning opportunities, especially when players seek out the royal couple. Both the king and queen make a grand appearance on reels 2 to 5 with an expanding masterpiece. Other features include golden tree money scatters, bonus spins with a staggering win potential and wilds.

Symbols to keep your eyes on are the dragon and the bird; each of these has the potential to award as much as £10K, although multipliers could force that sum even higher.

Heads up LBB’ers! There’s a delicious slot coming on January 23rd - Super Sweets – with delightful visuals and a tasty topping of bonus features. Sink your teeth into a variety of candies without risking your waistline and spin your way to the top for a serving of super sticky wilds, bonus spins and more. Think Sweet Bonanza by Pragmatic Play and you’re not far off in terms of its delicious theme.

In a style similar to Willy Wonka and the Chocolate Factory, the upcoming slot will take players into the heart of where the tasty treats are created, with a conveyor belt rolling in the produce with every spin of the reels. Three golden tickets will trigger the bonus spins with transforming wilds that remain sticky for the entire feature. Every time a pink bubble gum wild appears, another bonus spin is granted.

Super-sized sweets can land at any time with super-sized pay-outs. Last but not least is the double up game; a 50/50 game of win or lose. If you fancy your chances and want to win more (we all want to win more!), simply decide on heads or tails to either double your original winnings or lose the lot!

Bingo Billy and Mainstage Bingo are sure to offer the new and upcoming BetSoft titles. Keep your eyes peeled for their launch.

So many games, so little time (and money!). I can’t wait for the sweet one coming in January. Betsoft have a way of creating superb slot games.