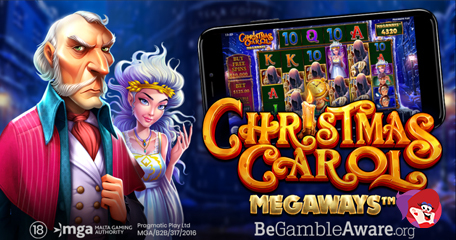 If you think Christmas slots are all the same, think again! Yes, Play’N Go may have just recently released their take on the much-loved Christmas Carol and now Pragmatic Play are following suit, but despite delivering an identical theme, the features are totally unique! Just like the story by Charles Dickens, three ghosts will pay players a visit to deliver big wins and epic bonus features, but there will be no sitting by the fire and waiting for the action to come to you – you must summon the spirits if you’re to stand any chance of winning!

This isn’t the first Megaways reel engine Pragmatic have tried their hand at –Curse of the Werewolf Megaways was and in similar style, players can up the ante (and the chances of bagging a win) by making use of additional features – a buy-in and/or a double chance to win feature. All the usual characters you’d expect from a slot game of this theme grace the reels; you’ve the three ghosts, a ghost of Christmas past, present and future, Scrooge himself – it’s not exactly hard to recognise him, Scrooge as a young man and a young lad, only we’re not sure if it’s him from his youth or little Tiny Tim.

Tumble Down Multiplier Up

Each win will see winning symbols evaluated and removed from the reels and as a result, new symbols will fall into place. This is what’s known as a cascade and will continue until no new wins are found. Four golden timepiece symbols will launch the bonus game and here’s where you get to choose one of the following:

Lena Yasir, Vice President at Pragmatic Play, said: “Christmas lights and Christmas trees are starting to go up in households all over the world and we can’t wait for one of the most magical times of the year, so we’re inviting you to join in with Christmas Carol Megaways. With a widely recognisable and a potentially lucrative Bonus Round, our Christmas hit will have players hoping the magic of the season never ends.”

Christmas Carol Megaways is a high volatility slot which means…

…the game pays out less often on average but the chance to hit big wins in a short space of time is higher. I’ve given it a go and can confirm the wins are few and far between – even more so when it comes to the bonus spins, but when you do actually gain access, the chance to win big is there. And thanks to the 10 free games option with a starting multiplier of 5x, I managed to reach a multiplier of 17x during the free games and turned my £2 stake into £243!

Where can you play this festive number? Over at Mr Q where newbies are welcomed with bonus spins on their first deposit and are treated to a no wagering requirements guarantee for the duration of their play!

Love Megaways slots and I love Christmas! I really can’t wait to give this one a go!