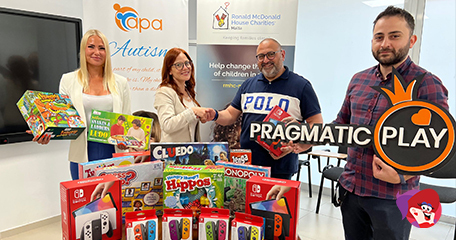 Last month was World Autism Awareness Month and Pragmatic Play, a leading content provider to the iGaming industry, contributed €18K to two autism charities to help build new facilities and assist in daily activities. World Autism Awareness Month is held every year to raise awareness about autism and how it affects not only those who live with it but the people around them as well.

The generous donations will go to Autism Parents Association and Autism Voice in Romania, the former was able to purchase gaming consoles, board games and other sensory products for youths to help with cognitive tasks, mental health and social skills while the latter will use the donation to open up new therapy suites in Bucharest.

An Operator Committed to Charity Donations

Autism Voice in Romania was established in 2008 to assist families with autistic children in two therapy settings. Thanks to Pragmatic Play’s generous donation, its new research centre covering an area of more than 1,000 square meters will open sooner than planned. The facility will include spaces for research and development in therapy while providing private species for therapy, training and councelling.

The Autism Parents Association (APA) is an official non-profit voluntary organisation based in Malta and was set up in 2013 by parents of children diagnosed with autism spectrum disorders with a view to educate and provide assistance to those who need it.

Julian Jarvis, CEO at Pragmatic Play, said: “Our CSR programme is extremely important to us, as we look to assist those in the communities that we’ve become part of. As April was World Autism Awareness Month, it gave us a perfect chance to work with charities close to our hearts and make a tangible difference. It has been a great experience working with both the Autism Parents Association and Autism Voice, and we look forward to being able to support them going forward.”

Pragmatic Play have had a busy couple of days, first it was new video slot releases and now a new live casino promotion where playing live casino games could result in random awarded wins dropping into your bankroll, but they still have time to help worthy causes. In Q3 of 2021 the software developer donated more than €40K to worthy causes in Gibraltar and Romania and just last month the operator donated £100K to the Ukraine appeal. Other charity donations have included more than £10K to Cancer Relief, €7,700 to the Homeless Animal Hospital in Romania, £100K to the Red Cross and €10K to the Carusel Association.

How wonderful! You rarely hear of donations from the people who make slots. You often hear of fines but never charitable work. This is lovely to read. I have autism...

How wonderful! You rarely hear of donations from the people who make slots. You often hear of fines but never charitable work. This is lovely to read. I have autism in my family and it’s definitely something people need to be more aware of.