Sneak Peek at Quickspin’s “Darkest and Most Volatile” Game Yet 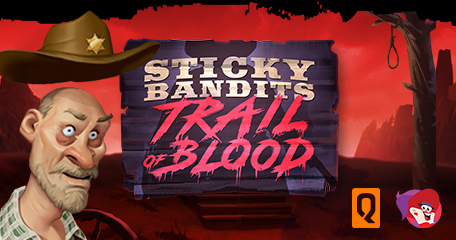 The Sticky Bandits series of slots from Quickspin is set to grow this August with the software developer hinting that things are about to take a dark turn. Sticky Bandits Trail of Blood will be the most volatile slot game so far with a far darker mood than any of the previous releases. And, unlike previous installments where scatters are used to trigger the bonus round, the upcoming title relies heavily on wilds with a higher minimum win during the bonus spins feature.

What’s the story? Tex Tallonis returns to the goldrush town, the town where he was once the sheriff’s deputy until he discovered their little secret – the town was being used as a cash machine to line the pockets of the elite and the law enforcers. With what he knew, the only thing he could do was…

…get out and seek justice and naturally he came up against some powerful enemies along the way. One night while busy searching out his enemies, bandits appeared in the town and literally blew the place to smithereens, killing Tex Tallonis’ wife and children. His enemies thought he died in the attack too, but they were wrong. One year later he’s back and he wants to use his skills to take out those who murdered his family. And this is where things get dark!

Insight Into the Bonuses

Expected for release on August 9th, Quickspin haven’t exactly remained tight-lipped over what to expect. We’re being promised all sorts of fun-filled features include a really wild showdown! It’s said if you get one wild per reel on a win line, they’ll stay sticky for the rest of the bonus spins with a generous reward of 300x credited per spin added to your bankroll. There are five different wilds on the 5-reel, 10 win line engine, one type per reel and they all work in the same way:

Bjarne Grönnevik, Producer: “Sticky Bandits Trail of Blood builds on the previous three games in our beloved Sticky Bandits series. This time we’ve created a darker story with a revenge theme, which is matched by a much darker artistic style. We’ve continued building on the Sticky Bandits mechanic but used a Wild trigger instead of the previous Scatters.

It’s a volatile game with tons of potential, due to the Sticky Wilds and ‘Blood Line’ in the free spins bonus, which is what all players will want to chase. If you get one Wild per reel on a win line, they stay sticky for the rest of the bonus game and the game will pay 300x per spin! The free spins mechanic effectively teases the possibility of higher wins by awarding extra free spins for each new Wild.”

Source: “Sticky Bandits Trail of Blood – Our Darkest and Most Volatile Addition to the Sticky Bandits Franchise” https://quickspin.com/news/sticky-bandits-trail-of-blood/. Quickspin. June 18, 2022.

Sounds like a great game! I loved the first one with the train and wilds launching free games. I’d actually forgotten about it until I read this.