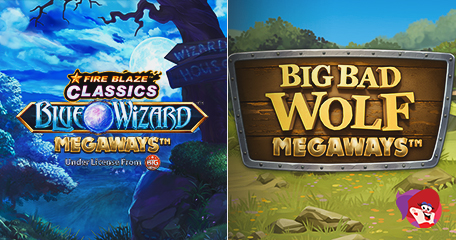 We have three exciting new Megaways slots to tell you about today which are Blue Wizard Megaways, Extreme Megaways and Big Bad Wolf Megaways. Who’d have thought 6-reels and up to 117,649 ways to win could be so popular, but they are, and each one comes with its very own unique win ways and bonus features. If you love to try new things and are on the look out for a new game to play, stick with us as we reveal everything there is to know, including where to play and win.

Blue Wizard Megaways is the sequel to the Blue Wizard release which launched in 2019. Powered by Rarestone Gaming/Playtech, players were able to win big through a series of bonus elements, including the popular Fire Blaze jackpot mechanic. Recycling is part and parcel of everyday life now and not just in the home, but when it comes to casino games too, with the sequel boasting that same big jackpot win potential plus free games with an increasing win multiplier.

Next up we have Extreme Megaways by StakeLogic, the deep space themed title with something no other slot of this nature has – extreme features! Players can enjoy the usual cascades, win multipliers and up to 117,649 ways to win per spin, plus a super stake option which activates extra features as well as 5 random reel modifiers! The bonus meter to the top of the reels is where the five possible modifiers can be triggered:

Both these new games can be found over at Play OJO Bingo.

Big Bad Wolf Megaways is here and like most other Megaways slots, it delivers edge of your seat entertainment through cascades, wilds and bonus spins with an increasing multiplier attached to winnings. Styled very similar to that of the original release, the three pigs must stay one step ahead of the wolf or they risk being eaten! Every second consecutive win, the pigs turn wild, and this leads to even more ways to win.

Three full moon icons award 11 bonus spins with wins subjected to a multiplier increasing by 1x with every win (not cascade), and when more moon symbols appear, not only do they boost bonus spins, but the multiplier too! Three award 3 additional spins plus a 5x multiplier while six increase the multiplier by 10x! Bid Bad Wolf Megaways is available to play at Leo Vegas.

Love big bad wolf! Will have to give the new one a try! Only hope it doesn’t take ages to get the wilds to activate like it does in the original game.