A League of Their Own Stars Pop into Buzz for Game of Bingo! 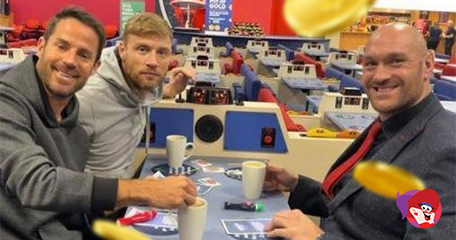 A couple of nights ago, three of the biggest stars in the UK decided to ditch filming in favour for a spot of bingo, to the surprise of the regulars. Andrew 'Freddie' Flintoff, former Liverpool FC star Jamie Redknapp and heavyweight champion boxer Tyson Fury were in Morecambe filming for the upcoming comedy panel show ‘A League of Their Own,’ only as soon as the cameras stopped rolling, they hot footed it to the local bingo hall to see if their luck was in!

They’re not the only stars to have enjoyed a game of bingo recently, Mrs Hinch and Stacey Solomon ventured out in slippers while silver-fox Martin Kemp decided to drop into his local branch of Mecca Bingo to celebrate his 60th birthday and their 60th anniversary.

Drop in and Dab

Buzz Bingo in Morecambe may have been empty when the lads stopped by for the jackpot game, but as the big bingo news got around, the player numbers soon increased. England cricket legend Flintoff, 43, posted a photo of the trio on social media with the caption: "Just three lads playing bingo in Morecambe. What a day me and @jamie.redknapp have had with the @gypsyking101, legend."

Redknapp, 48, replied: "Bingo and with the big man and champion of the world. Coming soon." It was safe to say the evening was a success, even if neither of them managed to win, because at the end of the night the three of them were recorded singing American Pie by Don McLean before heading off into the sunset together.

Some of the most famous celebrities with links to bingo include…

…Catherine Zeta Jones CBE, the wife of Michael Douglass, who believe it or not, only got into acting because her father won a substantial sum of money on bingo – enough to send her off to acting school! Prince William when stationed at Sandhurst, slipped off camp to play bingo in nearby Reading. What was supposed to be a quiet evening resulted in his face being plastered all over the front page of the morning newspapers.

Russell Crowe, famed for his role in the 2000 movie Gladiator, is more than just an actor, he is a pub owner and an Australian rugby league club owner with a history of bingo in his DNA. A family of bingo lovers led to him landing a job as a bingo caller before making it as a global movie superstar.

Last but not least, Robbie Williams, the former member of Take That and solo singer of “Rock DJ,” has long been a fan of playing bingo. Not long ago he was playing in Los Angeles when he won a leopard-skin bag, which he subsequently donated to charity.

Crazy to think you could be playing bingo one evening when a celeb walks in. I don’t know what I’d do. Mind you, where my bingo halls are, there’s no risk of that...

Crazy to think you could be playing bingo one evening when a celeb walks in. I don’t know what I’d do. Mind you, where my bingo halls are, there’s no risk of that happening!