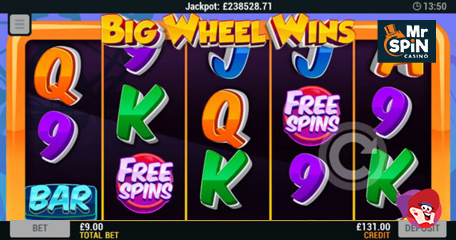 All the fun of the fair has been crammed into a delightful new slot game over at Mr Spin only, those who are yet to visit can try its features for free! Forget paying admission and tickets to ride, this is one freebie that guarantees to cost nothing! Big Wheel Wins is the latest release to roll off the conveyor belt over at In Touch Games HQ and it’s proving to be popular already!

Calling on both new and exiting players to test drive its features with as many as 35 no deposit spins, Big Wheel Wins is a carnival of fun jus waiting to happen! Log in, spin that wheel of fortune that appears automatically and claim a set number of guaranteed games for the latest arrival. What does it offer the player? How about a whopping great progressive jackpot element, wilds, not one but two big wheel mini games crammed with multipliers, bonus spins and ultra upgrades!

Now, the spins on the house feature may only be worth 18p a spin, but there’s great big win potential hiding behind those symbols! I triggered 25 free games via the wheel of fortune and managed to turn those spins into a respectable £14.90! Again, that may not seem like much but that’s bonus funds I can use later on any number of titles offered at Mr Spin, including the progressive jackpot paying Shamrock Holmes with a pot of more than £244K waiting to be uncovered (not to be confused with Microgaming’s release), or even on the bingo where you can swap points for prizes!

Roll Up Roll Up

Screams of excitement as the rides take to the air, funfair tunes and masses of treats are guaranteed at Mr Spin’s carnival and you know what else is? More than just a free chance at winning some cash! With your bonus spins in hand, you could trigger a win of any amount, including that epic networked progressive- – it pays to stay positive!

Five golden bells unlock the jackpot but wilds as great as they are at helping create wins, they’ll reduce your jackpot win should they fall as part of that win line, so be wary of that! Free games icons award between 5 and 15 free games depending on the number of icons that fall, with the ability to re-trigger while in play.

Other features include Yes No Go Go where a spin of the wheel can award up to 250x and the best bit – you’ll keep on spinning as long as you’re winning! Colourful segment icons (2 to 5) on a win line will trigger the other spinning wheel bonus where you gather multipliers as you go. Once an amount has been claimed, the multiplier segment turns to ‘collect’ and should you land on this again, the feature ends. As you play, you have the ability to upgrade your multipliers by landing on the yellow +win option, which could see those segments turn from 10x to as much as 300x per spin!

A huge change from the last 2 slots; one was a wolf theme which was very dark and the other I’m a celeb inspired. Be interesting to see how it differs in bonuses.

A huge change from the last 2 slots; one was a wolf theme which was very dark and the other I’m a celeb inspired. Be interesting to see how it differs in bonuses.