Bingo Cams: Go Diving for Dough in an £80K Adventure 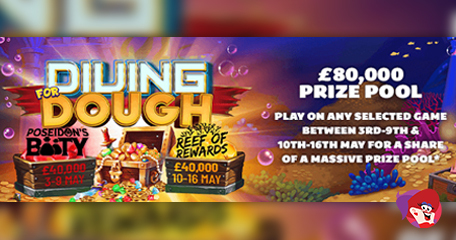 Bingo Cams Are Splashing the Cash This May!

Hey LBB’ers! I was sitting down this morning with a cuppa when it suddenly dawned on me – I hadn’t logged into Bingo Cams for a while. So, off I went over to the website and found a phenomenal promotion up and running – one where players can win a share of a guaranteed £80K prize pool! The two-stage online special requires registered players to spin the reels of certain qualifying games, each with a pot bursting with £40K in wager-free cash.

Before I divulge the details on how to scoop a slice of the cash-prize pie, let’s talk about the actual bingo site. Now, I admit, the name of the bingo site did actually put me off playing at first because I was under the impression you needed to have a webcam to play, so you could show everyone your face while playing, but it is nothing like that! There is an option to send in your winning reactions via video, but again, this is not a requirement. Glad that one’s all cleared up.

Teaming up with Yggdrasil means Bingo Cams will be dropping cash into player accounts either via random cash drops or by completion of missions. Unlike traditional tourneys, there is no minimum bet requirement with this one. You could be playing the bare minimum of 10p a spin and still manage to win £5K in cash! The first pot of cash is a random cash drop element with prizes ranging from £10 to £5K. A total of 640 prizes will be won but you only have until May 9th to get involved with this one.

Play any of the following qualifying games to be in with a chance of winning:

Four missions stand between you and a top prize of £10K. Complete all four in the shortest possible number of spins to get your name on the leader-board. Again, there are no minimum spin requirements for this one.

I thought bingo cams required you to have a live broadcast to play! I haven’t signed up for that very reason! Now I know it’s not needed, I’ll join!