Cook Up a Cash ‘Storm’ in Two New Megaways Titles 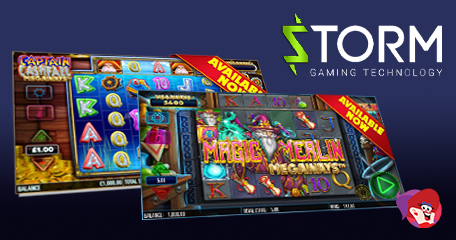 Since Big Time Gaming invented the Megaways reel mechanic back in 2016, the online casino sector has exploded with interest! Bonanza may have been the first slot to emerge with up to 117,649 ways to win per spin and an explosive bonus spins round with an unlimited multiplier, but it certainly won’t be the last!

Six reels and an eye-watering number of ways to win are offered to any casino game developer, providing they acquire the license to do so and this has resulted in an influx in engaging, immersive and thrilling Megaways titles! And, you can add two more to that ever-growing list, courtesy of Storm Gaming, the UK-based software provider who have a 10-year pedigree in producing high performing content for the global market!

Storm in a Teacup

Ex-Blueprint Gaming CEO Darren Breese and Richard Sheldon are the owners of Storm Gaming and together, they have partnered with some of the world’s largest gaming and media companies. A portfolio comprising of some of the most exciting and instantly recognisable brands include ITV’s The Chase, Thunderbirds and the much-loved ‘Carry On’ films.

It may have taken a year, but the sequel to the Captain Cashfall’s Treasure of the Deep release has now emerged, delivering a plethora of bonuses to whet player’s appetites! It’ll be all hands-on deck for the brand-new Captain Cashfall Megaways with its swashbuckling adventure gameplay. Set sail for the high seas for wave after wave of excitement with the usual 6-reel, up to 117,649 ways to win, along with plenty of hidden surprises!

Cascading symbols and three features that can be triggered through continuous play have been packed into the reel engine, along with multipliers and plenty of ways to win. A wheel-house fortune bonus, cans of cash bonus, deep sea treasure bonus, bonus spins with an increasing multiplier and two independent reel modifiers make for one hell of a good time!

A Sprinkle of Magic Dust

Magic Merlin Megaways also joins the line-up of unique slots over at Storm HQ, and it’s one where features such as magic spells can assist you with wins when you least expect it! Winning combinations can lead to many more courtesy of the much-loved cascading reel engine. Magic dust (you can’t miss it it’s green!) will fly over into the cauldron with every win achieved and if this generates a magic spell, it will release itself into the upper reel and add at least one wild!

Four scatter symbols (a book) will award 12 free games with an increasing multiplier on wins! More scatters will lead to more free games and there are magic wilds to help convert non-winning spins into winning ones too! It’s visually pleasing and offers regular base game wins, however, you could be spinning a while before entering the free games bonus!

Keep your eyes peeled over at Mr Green for them going live.

Loved Captain Cashfall when it first emerged. The sequel sounds even better than the original and that offered some pretty amazing features!