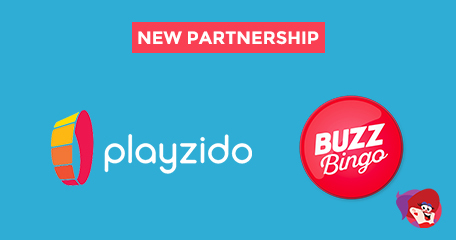 Playzido is made up of a group of gaming experts with incredible brands and big ambitions and they’re about to become even bigger thanks to a deal with Buzz Bingo. Leading titles from their ever-growing portfolio will soon be available to Buzz Bingo players, including the super popular Deal or No Deal games and the many different Megaways titles.

The deal will also see players benefiting from Playzido’s library of aggregated content from the likes of Reel Play, Bulletproof and Endemol Shine Gaming. And the deal is the first of its kind for the software developer since the recently completed integration into the Playtech Open Platform. Popular games include branded Dumb and Dumber, the highly volatile slot machine based on the movie of the same name and anyone who has ever watched it will know, it’s crazy with many exciting elements.

Stuart Banks, CEO of Playzido said: “Buzz Bingo is huge player in the UK online bingo market, and we are delighted to be bringing our expanding portfolio of original and branded content to their customers. The partnership is the first of many planned operator launches via Playtech’s Games Marketplace and marks an exciting milestone for Playzido.”

Dave Evans, Digital Operations Director at Buzz Bingo added: “We already have a host of fantastic bingo and slots games at Buzz Bingo and we are thrilled to be working with Playzido to add its most-loved games for our customers to enjoy.”

Games with a Difference

Sure you know Megaways titles, but I bet you don’t know…

…Playzido Megaways titles! Forget bonus spins features where multipliers of up to 10,000x can be applied to consecutive wins, these reel engines are all about the jackpots and the re-spins. Packed into the 6-reel engine, there are up to 117,649 ways to win with cascading symbols, but the bonus can deliver eye-watering wins as well as one of – or four, big jackpots!

Atlantis Megaways will launch its treasure re-spin bonus on the presence of at least 6 treasure chest values. In a similar style to that of Fluffy Favourites in Space by Eyecon or Wolf Gold by Pragmatic Play, three re-spins are granted. Should you happened to land more treasure chest symbols, the re-spin meter resets to 3. This process will continue until you either have no re-spins remaining, or you have an entire reel engine of treasure chest symbols.

Each chest contains a value and should a blue, pink, white or golden pearl be found inside, the value of that chest grows to become 10x, 50x, 250x and 2,000x respectively! The sequel to Hypernova Megaways sees players summoning the help of the god of the ocean as he aims to uncover epic wins.

Atlantis is one of my favourite Megaways slots to play. I’ve had the white pearl a few times, but can’t seem to find that elusive golden pearl!