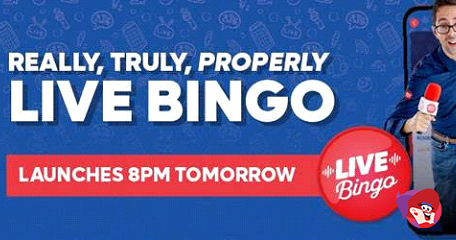 Look Out For Gameshow Bonus Rounds!

Live Bingo is a new and exclusive bingo variant only available to Buzz Bingo players and it comes complete with a live interactive feature, multiple gameshow bonus rounds and the chance to win big cash prizes.

The new bingo product game changer will run for 2 hours between 8pm and 10pm every evening with a live presenter in every show. Players (and spectators) are encouraged to take part in interactive games and chat for a more immersive experience.

I had the pleasure of testing the top secret game a few weeks ago and at the time I wasn’t exactly thrilled with it, but since then, a few tweaks have been made and a lot more cash has been ploughed into the pot! Instead of 1,000+ players attempting to win just £15, there will be prizes of up to £1K to celebrate its launch.

Real-life interaction, which is typically only found in live casino games, is what makes this bingo game so different to the rest, and of course its bonus rounds. A fun-filled, prize-packed bingo session will roll out on the first weekend which just so happens to be Buzz Bingo’s 4th anniversary weekend.

What do you make of the new bingo experience? Will you be giving it a try? Reminder: Buzz Bingo’s live bingo room comes with a pre-buy feature, allowing you to participate in upcoming games without being logged in or online.

Sounds really good but I suspect the room will be heaving for the first couple of weeks. I’ll hold off until it quietens down.