£100K Won by Betfred Player While ‘Spending A Penny’ 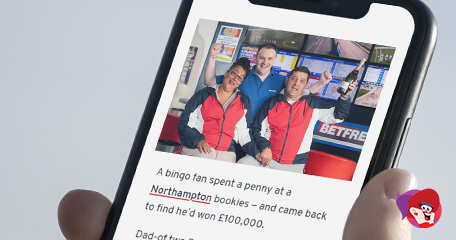 These days, playing penny bingo games can result in you winning big pounds, in fact, playing for free can lead to the same outcome too, but one bingo super-fan from Northampton never thought he’d win a prize so large it would leave him speechless.

Dad-of two Danut Sulca decided he would try his luck with his favourite game of bingo, placing just a £1 wager on his own lucky numbers. With bet secured, he decided to ‘spend a penny.’ On his return from the loo, he was told that his numbers had come up and he had won a large amount of money.

Betfred shop manager Jason Kelly said: “I thought he was going to pass out with the excitement. I went round to give him a hug and hold him up, then got him a glass of water. He knew he’d won a decent amount but not £100,000. Danut is a regular customer, a really nice bloke who deserves his big win.”

How Did He Win?

Did bingo superstition play a part in his win? We suspect it may have!

The inspiration behind his chosen numbers were as follows: 8 because August is the eighth month and this was the month he was born, 45 as it’s his wife’s age and 49, for his own age. The number 19 was chosen to represent the century in which he was born (1973) as there are only 49 numbers in the game, and he switched number seventy-three to make the number 37. Danut may have been born on the 23rd, but he opted for the number 33 instead which is quite remarkable as he matched all numbers drawn!

Danut said: “I just can’t believe it. I rang my wife Elina and she was crying because like me she is so happy. We had some extra drinks to celebrate a win that has changed our lives forever. We both work shifts on minimum wage so you can imagine how much £100,000 means to us.”

Bonus King Bingo can only be played in Betfred shops. A far greater choice of bingo games can be played online, including lottery games where matching 6 numbers awards prizes of £5million! Popular bingo games to play include Rainbow Riches Bingo, Cash Cubes, Age of the Gods Bingo and Fluffy Favourites Bingo.

Just like high-street bingo, Betfred is also home to session bingo where bulk-buying tickets into an hour of games not only saves you money, but gives you chances to win big prizes too! Everyone who takes part in these bingo games has the same chance of winning and from as little as £2.50p for 15 games!

I have lucky numbers, not sure why I call them lucky numbers because I never win, but I have this thing that if I don’t use them, they’ll come out! Wish I had this...

I have lucky numbers, not sure why I call them lucky numbers because I never win, but I have this thing that if I don’t use them, they’ll come out! Wish I had this guys luck!