Scores of New Games to Come from Microgaming this September 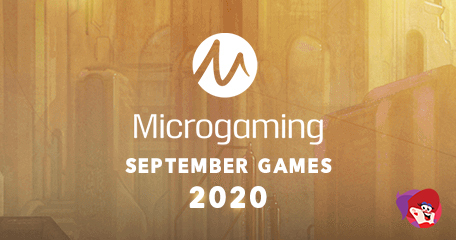 Boasting one of the biggest progressive jackpot networks in the world, Microgaming knows how to deliver the ultimate gaming experience with life-changing win potential. Their network of slots has paid more than €1.2 billion across 2,571,389 jackpots since launching (to date!) and now that list of progressive titles is set to grow once again, as the award-winning software developer unveils plans for scores of new September releases!

Kicking September off in style was Book of Atem WowPot (by All41Studios), joining Wheel of Wishes as the second game to feature the iconic Microgaming WowPot where jackpots start at €2,000,000. Featuring a modern take on an ancient civilisation in Egypt, the 5x3 reel engine offers a host of features as well as big win opportunities. Bonus spins with an expanding symbol (similar to that of the Book of Dead by Play’n GO) are among those with great prize-potential.

A third title was added to the WowPot series of casino games on September 7th and it’s one celebrating enchanting ladies; Sisters of Oz WowPot. Brimming with fantasy, magic, thrills and adventure, character symbols are always stacked for maximum winning effect and when it comes to the bonus spins feature, players are guaranteed to see jumbo blocks (colossal symbols) on every spin! The trick here is to get them to land to award an epic win! Land a golden coin for a shot at one of four jackpots.

Is the Best Yet to Come?

Make a date in your diary for the 22nd…

…because expert navigator and acclaimed explorer, Victoria, and the industrious inventor of mechanical marvels, Maximillian are set to return in the sequel to the Fortunium release – Fortunium Gold Mega Moolah! Making a triumphant return with more ways to win and more prizes, the 5x5 reel slot packs in 40 win lines, mystery symbols, a win booster (increases your bets for better chances of winning!) and bonus spins with mystery reels!

Noble Sky by Neon Valley Studios (the folks behind the enchanting Aurora Wilds title) will seep layers take flight on September 29th on a mechanical airship packed with thrills! Re-spins are offered in the base game as well as wilds and a multiplier trail. Plus, a minim minor, major and grand progressive are up for the taking too! But that’s not all! This month promises a further 30-something titles, all of which can produce eye-watering wins on the smallest of stakes!

No Commission Baccarat and Sic Bo by Switch Studios is set to join the Microgaming platform on 17th and 24th September respectively. A wealth of other titles is promised, including One Million Megaways BC (by Iron Dog Studio, a brand within the 1x2 Network), Magic Merlin Megaways (by Storm Gaming), Star Clusters Megaclusters (by Big Time Gaming), Cubes (by Hacksaw Gaming) and even more! Stellar Portals (by Snowborn Games), Almighty Aztec (by SpinPlay Games) and Spectre Estate (JustForTheWin) were released earlier this month.

Microgaming showing why they’re an award-winning software provider once again! I can imagine it’s pretty tough for rival companies to keep up with the pace in which...

Microgaming showing why they’re an award-winning software provider once again! I can imagine it’s pretty tough for rival companies to keep up with the pace in which they unveil new releases!