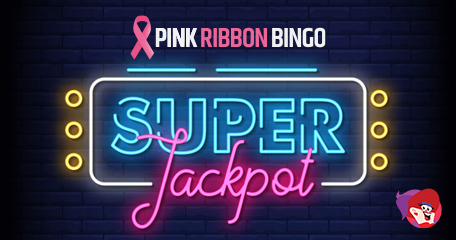 It’s been another busy week for slot machine developers with many different titles hitting the online casino scene. Play’n Go is back with slot 22 of 52 with Cat Wilde and the Doom of Dead, Pragmatic Play delivered us not one but two thrilling games; Drago: Jewels of Fortune and Pyramid King and Red Tiger Gaming also threw us a curveball with their latest gunslinging slot.

Every one of those latest games offers many ways to win through exciting and sometimes unique features, but neither guarantee a jackpot will be won – but we know a series of super slots where you get just that.

Pink Ribbon Bingo (the only bingo site to donate a portion of profits to charity; Against Breast Cancer) has been in the bingo business since 1997 and ever since they threw their doors open, the selection of games has been astonishing! From free bingo to guaranteed jackpot specials, there’s never a dull moment here.

Another thing they’re famous for (aside from the thousands going to a very worthy cause) is slots and they don’t come much better than super slots by Eyecon. In January 2019, Eyecon put some oomph into their games by adding increased cash prizes. The top prize can be as much as £50K depending on the game you play.

If you believe you have to spend big to win big, I’ll let you in on a little secret. Over at Butlers Bingo, one lucky devil was playing a progressive slot when his 25p spin netted him a staggering £5,883,044 and, an Iceland Bingo player, a single mum of two, landed more than £3.4million from just a 15p spin!

Top of the Slots:

When it comes to the maximum pay of £25K, the prize structure is as follows:

The largest value top prize of £50K sees the cash values doubled, so, Maxi would be seeded at £100 and can reach £500 at its maximum. All of the titles can be played on mobile and each delivers its own theme, pays and bonuses. One of the popular games to play is Shaman’s Dream, a Native American, 5-reel, 25-win line engine packed with totems, axes, bears and free games!

So many jackpots to be won, shame I’m so unlucky! Those Megaways ones, they say up to 117,649 ways to win, but for me, there are millions of ways to lose! I tend...

So many jackpots to be won, shame I’m so unlucky! Those Megaways ones, they say up to 117,649 ways to win, but for me, there are millions of ways to lose! I tend to give them a try once a month or so, because someone has to win!