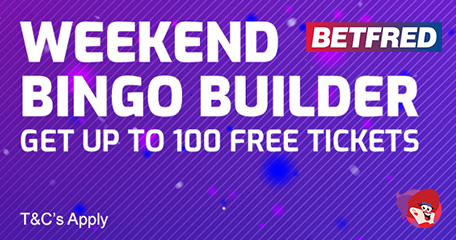 More Ways to Win Prizes Than Ever Before!

From super September to autumn escalators, rush hours to Friday fever, Betfred Bingo has a jam-packed schedule with plenty of cash, spins and tickets up for grabs, and the best bit? It won’t cost you any extra to take part! They’ve got some fantastic techy homewares up for grabs in just one promotion, including mobile phones, vacuum cleaners, blenders and much more. Sixty prizes will be won by the bingo dabbing community for simply opting in and playing specific games. Every £10 spent on bingo tickets and every £30 on side games will generate one ticket into the final draw on September 20th.

Keep a look out for double entry chances on Wednesday and Sunday to generate two tickets for the price of one. Winners will be sent a code by Wednesday 22nd September which will allow them to pick a prize of their choice from within the value tier. The tiers and prizes are as follows:

Love playing Megaways slots? You’ll love this offer from Betfred Bingo! Play your favourite slots any time until Sunday and climb the ladder to get rewarded with as many as 50 free games! Opt-in, stake £25 on any slots (there are hundreds available!) and earn yourself 10 bonus spins. Each additional £25 spent will take you further up the ladder to even more spins! The free play spins will be credited on Monday, just load up one of the following slots to use them:

Winnings will be credited as cash with no wagering…

…as with all other Betfred Bingo promotions! Including the weekend bingo builder special! If you fancy getting your hands on up to 100 free tickets to play in any of the Playtech powered bingo rooms, just opt in and receive 1 free ticket for every £1 wagered in bingo rooms. Will it be the mighty powerful Age of the Gods bingo with its community jackpot bonus round, DOND with the banker bonus or Rainbow Riches with its three pots of gold jackpots? Wherever you choose to play, as long as you play by Sunday 12th, you’ll qualify for this promotion!

On the subject of Rainbow Riches, a special Rainbow Riches prize night gets underway every second Friday of the month, with £15K being won! The next games will take place on Friday 24th with extra 1TG and 2TG prizes too!

To win a £500 cash prize or one of 11 other cash prizes, all you need to do to take part is opt in and every £10 staked on side games until the 12th, will get you 1 entry into the draw. Plus, there’s no limit to the number of entries you can gather! The cash drop promo will guarantee twelve winners, each will receive their real money winnings within 24-hours of the prize draw taking place. First name out the hat gets £500, further prizes include 2x £200, 3x £100 and 6x £50.

Summer may be over but autumn fun is just getting started with Betfred Bingo’s autumn escalators. The promotion takes place in the Bonkers bingo room on the Friday 10th and 24th September, in the Game On bingo room and the Betfred bunker between 6pm and 11:45pm. To make these games even more exciting, the ball count will increase by 2 every hour to guarantee a minimum of £7,500 being won by midnight. The community also gets to win a prize as 50% of the jackpot will be paid to the winner and the remaining 50% will be shared equally between all players who have purchased tickets into the winning jackpot game!

Want in on the fun? Join Betfred Bingo, spend £10 on bingo tickets and receive a bingo bonus of £10 and 100 bonus spins! Use promo code: BINGO100 in the cashier to qualify. There will be no wagering requirements on winnings and no maximum win limit either!

Withdrawals are really fast here, especially when you use paypal. Longest I’ve had to wait is 5 hours, usually it’s within 1 hour!

"New depositing players may not..."

"The original had a random feat..."