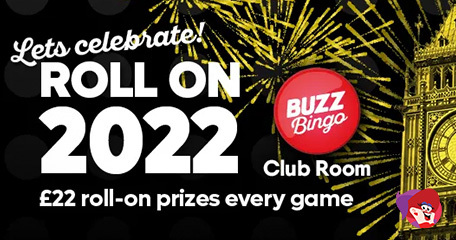 Lots of Cash Will be Won by Real Players!

Looking for online bingo with a bang? Look no further! Buzz Bingo has ditched the festive promotions in favour of new year surprises, and we can’t believe our eyes! There’s only a few days left of 2021 and to celebrate, one of the most popular bingo rooms is guaranteeing more roll-on prizes in every game! In another cash-packed promotion, £100K big bang jackpots will be won and that’s not one jackpot, but several!

Jackpots are a prominent feature of Buzz with mega and life-changing cash to be won in both bingo and games. Take Playtech’s Age of the Gods franchise for example, any spin on any of these games could net you one of four progressive jackpot sums! If you happen to be spinning with the jackpot bonus is triggered, you will win one of the pots of cash!

Plenty of Dough to be Won

On the subject of jackpots, more cash can be won in the must drop jackpots by Red Tiger Gaming, only unlike rival online bingo and casino sites, Buzz Bingo is guaranteeing a jackpot will be won every 10-minutes! That’s a total of six winners every hour and 144 jackpot winners every day! Popular titles include the explosive release – Dynamite Riches and Mustang Gold title.

Where was I? Oh yes, big bang jackpots. All you need to do is play in any of the bingo rooms between Boxing Day and January 2nd to be in with a chance of winning the following prizes:

All-in-all, that’s half a million pounds that will be won by real players, players just like you…

…but you can’t win unless you’re in! When the jackpot is won, 50% goes to the winner and the remaining 50% is shared between the community. Your jackpot win chance will grow as the night goes on as the required number of balls needed to trigger that jackpot will be increased. Ball call requirement will increase at a rate of 2 per hour. Of nobody wins it by 11:45pm, the next player to get a full house will win the jackpot!

Everyone wants extra chances to win but unless you can afford to max out on tickets, the chances of this happening are very rare. Unless you’re taking part in the Buzz Bingo roll on 2022 bingo games! Every evening at 8:25pm, the Buzz Club room will guarantee extra winners with £22 roll-on prizes in every game. These games are scheduled to run until January 9th, so plenty of time to take part!

Great jackpots at buzz. The rooms are hard to win in though, but someone has to win.