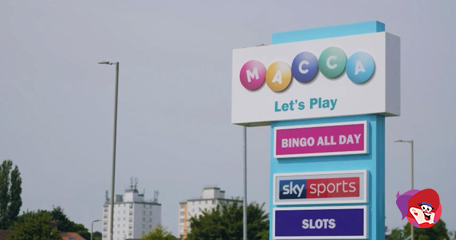 Here’s something you don’t see every day, Mecca Bingo changing their signage in honour of someone’s Birthday, Sir Paul McCartney’s Birthday. Liverpool residents got a huge surprise when the bingo hall in Knotty Ash changed its name from Mecca Bingo to Macca Bingo overnight, to celebrate the Beatles 80th birthday.

The octogenarian even had an invitation from the club to come and call the numbers, but we suspect he may be busy partying in New York. Liverpudlians will be able to witness the new logo for one week only, before it reverts to its original form.

Lucy Coy, General Manager for Mecca Bingo Knotty Ash, commented on the change: “We can’t wait to see our customers’ faces when they see the Macca Bingo logo this weekend. Sir Paul is such a national treasure, so we’re delighted to celebrate his special birthday and landmark performance with a rebrand in his honour. Sir Paul, if you’d like to take over the microphone from one of our callers, we’d love to see you!”

Stars in Your Eyes

It wasn’t uncommon for big pop groups such as the Beatles to play in bingo clubs in the 1960’s, even nowadays we’re seeing some of the biggest acts past and present in bingo halls up and down the country. UK bingo halls are famed for merging entertainment with bingo, from drag acts to comedy shows to the surprise celebrity visitors, bingo isn’t just a place to dab tickets in the hope of a win.

Famous faces to grace bingo venues in this country include Mrs Hinch and Stacey Solomon, turning up unannounced in pj’s and slippers for a night of bingo games and fun, A League of Their Own stars Freddie Flintoff and Jamie Redknapp, accompanied by Tyson Fury rocked up to a Buzz Bingo without warning for a few rounds of bingo and silver fox Martin Kemp, the Spandau Ballet and ex-Eastenders actor celebrated his 60th Birthday with Mecca Bingo in 2021. You never know who you may bump into at your local bingo hall!

You too could feel like a celeb with Mecca Bingo’s exceptional line-up of hot no deposit promotions, just log in every day to give that wheel a spin to see if you can bag yourself a free holiday! Other prizes include bingo bonuses, games bonuses and real money prizes! Other free-to-enter promotions include their exclusive raffles and this week you could win a £200 UberEats voucher or a Galaxy Z Flip3 phone! To enter, send your details on a postcard to the raffle address and keep your fingers crossed for a win!

What a lovely thing to do, but I doubt he will even hear about it. Could you imagine him rocking up to a Mecca Bingo hall to call the numbers? I highly doubt it....

What a lovely thing to do, but I doubt he will even hear about it. Could you imagine him rocking up to a Mecca Bingo hall to call the numbers? I highly doubt it. But you never know.