We noticed that you just claimed a bonus from Hippo Bingo ?

Hippo Bingo comes with a theme that draws inspiration from the open grounds as much it does from the deep depths of online bingo. The stage is set with a mixture of colours and background pictures that bring in a feel of tranquillity and excitement to mind. Founded in 2011, the site has established itself as one of the top bingo locations in the Dragonfish network.

Home to both their own and shared rooms, this online bingo site won’t run out of games to display any time soon. And that goes for slots, jackpots and Slingo titles too. To speed up the experience of exploring all these games the site offers considerable bonuses and other promotions.

Being regulated by the Gibraltar Gaming Commission and the UK Gaming Commission means that Hippo Bingo functions under two of the strongest licenses in the industry. These not only ensure that the servers are properly audited and tested, but also that the players are bestowed rights that protect them. Responsible gaming tools are present too.

For any technical or administrative issues the first stop should always be the FAQ. Secondly, once you log in you can access a series of useful articles via your own account…

...and if that doesn’t solve your issue you are left with three options. First, you can contact the customer support team via email. You can expect a response in 72 hours maximum, which is a bit too long waiting period for our liking. Secondly, UK players can call a toll-free number, whilst players outside the UK have to foot the bill. Finally, there is also a support room that all players can reach once they have logged in. Wait times aren’t considerable, and it's usually easy and fast to get a response this way.

From promo codes to bingo tournaments

We’re going to touch the rewards system a bit later in the review, because it’s quite extensive in its own right. But before going there, players should check out the amazing promos that this bingo site offers.

New players get their hands in bingo cash and extra spins. The spins come with ridiculous wagering requirements, which practically makes them worthless. And on top of that they come with win limits too.

It’s a nice way to get to know a slot, but don’t expect to cash out on those bonuses.

That said, the bonuses aimed at bingo games don’t generally come with such limitations. They also offer a lot more variety, by including free tickets, extra tournaments and mystery jackpots for depositing players are all intriguing encounters.

Tip: Remember to check the offers page before depositing, as Hippo Bingo offers deposit codes that change every week.

90 ball bingo and 75 ball bingo are the two most popular bingo variants available. You can also find the occasional room with 52 ball bingo, which is quite different from the norm. Some rooms might offer a slightly different variation on these ball setups, such as only having 24 numbers on a card instead of the usual 25.

The most active rooms run a game every few minutes, whilst guaranteed and mystery jackpots or weekend tournaments only run on the specified times. During busy periods there are a dozen or more rooms running games simultaneously, so you’re really spoiled for choice here.

The jackpots don’t quite reach the million pound specials that some other sites offer, instead opting for more manageable sums that are still a delight to pocket. If you’re looking for bigger pots, the online slots section with progressive jackpots is a good choice.

Depending on luck, there might be promotions from software providers like Pragmatic Play, whose mega-tournaments offer prizes easily running into tens of thousands.

Before moving onto the slots, you might want to take a look at the slingo games. Book of Slingo, Monopoly Slingo, Sling Reel Extreme, Slingo Reveal and many other titles offer a combination of bingo and slot gaming.

Whilst there are no table games, there are literally hundreds of slots to enjoy. You could play a different game between every bingo game you’ve enjoyed, and still have a long way to go before reaching the end of selection. Especially as Dragonfish adds new games to the mix constantly.

It’s no surprise that a bingo site that organizes raffles that sometimes have smartwatches and latest smartphones as prizes also comes with full mobile support. Does the site work on a smartwatch? We’re not quite sure about that.

After checking out the offers all players should head to the rewards section. You’ll soon notice that this is the real benefit of playing at Hippo Bingo. Players can get access to following:

The two different rewards wheels open up a whole other world of rewards, with even more bingo tickets, extra spins, bonuses, prizes and even cash up for grabs.

All the benefits of being part of a large network and enough personality to stand out amongst a mass of other sites. The unique touch still needs a bit of work (seriously, where’s that hippo?) but otherwise we don’t have a bad word to say about Hippo Bingo. A good place to fill your bingo cards! 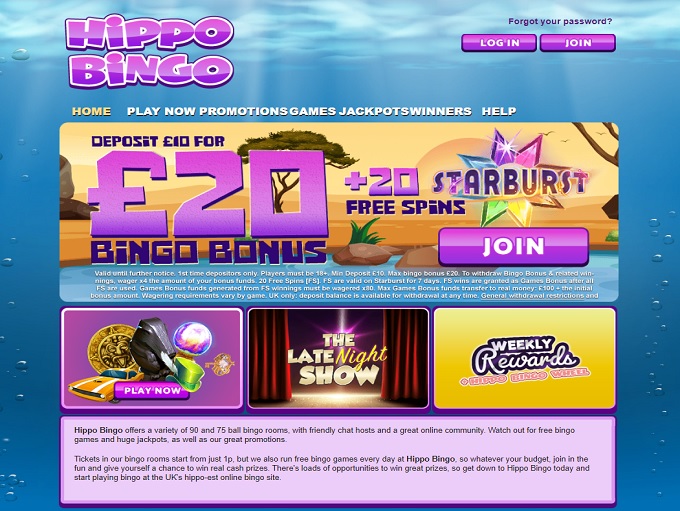 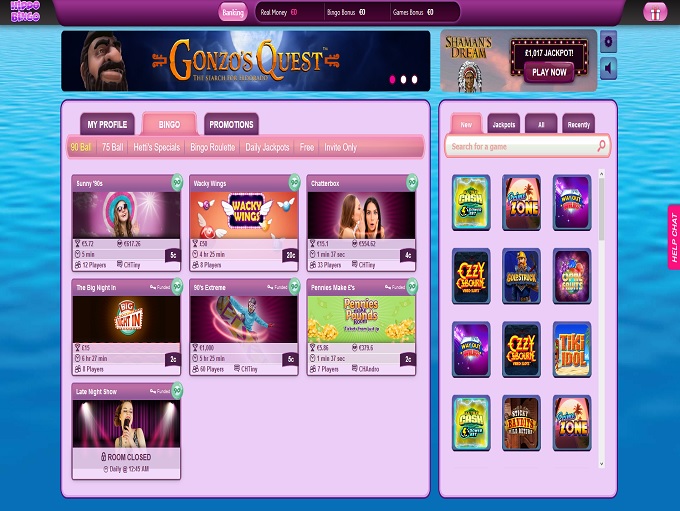 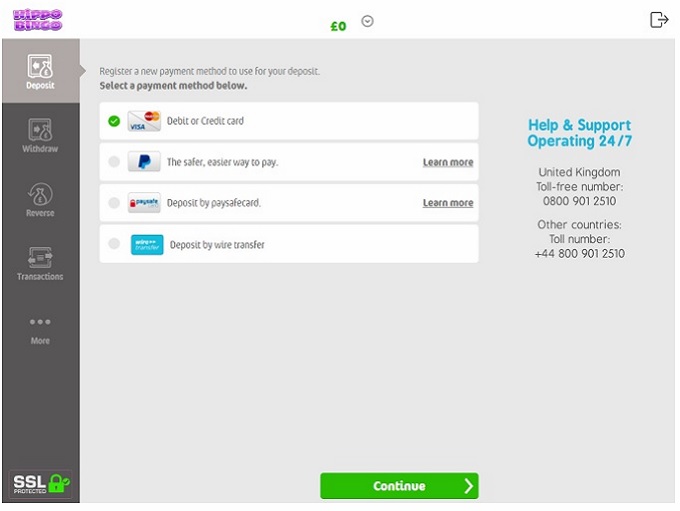 i normally wouldnt play bingo or even bother to play free bingo at any site owned by dragonfish network becoz it is practically impossible to win due to the fact...

i normally wouldnt play bingo or even bother to play free bingo at any site owned by dragonfish network becoz it is practically impossible to win due to the fact that over share the same bingo rooms. hippo bingo is part of this big network but unlike most of its sister sites, hippo bingo also has its own rooms including a free bingo room which only its players can access. the free room known as hetti's house is for funded players. its open every tues & sun. players can win guaranteed cash Up to £30 prizepools and a total of £330 in mixed jackpots if you haven't deposited as you can also play for free - just head to the 'Free' tab in the Bingo Lobby. these rooms are shared with other sites in network. when hippo bingo 1st opened, i use to win at least once, at every session, but nowadays u lucky if u win at all coz more players no abt the free rooms.

Right from the start you can feel a positive energy on Hippo Bingo; the design of the site is very interesting and it has a lovely mascot â€“ a hippo, of course....

Right from the start you can feel a positive energy on Hippo Bingo; the design of the site is very interesting and it has a lovely mascot â€“ a hippo, of course. This is a newer online bingo site and it's clear it wants to have its regular players; great bonus offers including a Sign Up and Reload Bonuses, the Live Help is very friendly and they are ready to help right away â€“ at least I didn't have any problems with them. The games are powered by Dragonfish software and at Hippo Bingo players can play 90 and 75-ball bingo. Some very popular slots are also available such as Bejeweled, Fluffy Favorites and many others. Their games have really nice jackpots and depending on number of deposits, players can move up rather easily through the Loyalty program of Hippo Bingo.

There are so many nice aspects about this site that I don't even know where to begin! So, I'll just start with my favorite part which is, of course, the free bingo!...

There are so many nice aspects about this site that I don't even know where to begin! So, I'll just start with my favorite part which is, of course, the free bingo! All layers are given daily free bingo options. Funded players can enjoy a dose of freedom every day from 4pm-7pm every 15 minutes in the free bingo funded room. Non-funded players have the opportunity to play from 7am-7pm every 8 minutes in the free for all room. It's refreshing to see a spot that offer not only free bingo daily but to all players, not just players who make the largest deposits. They also have a really cool promotion for new players to the site. They call it Hetti's Newbie Party. As a special welcome to new players, if they head to Hetti's House private room, they can enjoy an entire hour of free bingo. Your account will be pre-loaded with 12 free tickets for the first game.

First of all, I love the theme at this site! I found it to be adorable and maybe that's just me but I don't really care! They have the standard bingo variations...

First of all, I love the theme at this site! I found it to be adorable and maybe that's just me but I don't really care! They have the standard bingo variations including the British and American versions as well as a high 5 bingo which is one of my very favorites. It's a nice break away from the norm and what could be better than 5 different ways to win? I also really like that if you click on the â€˜Bingo' section, they will give you a complete list of progressive and coverall jackpot giveaways. This way you can keep track of each time they're giving away the biggest and most exciting jackpots. They give away cash like crazy here. Aside from their bingo, they really have a nice variety of table games, super slots and video poker. Overall, this is one of my favorite sites and I'm just really happy with everything they have here!

Hippo Bingo is just what you thing it is, a site with a Hippo theme (for some reason, a Hippo in the bikini is not really my cup of tea, but it does look kind of...

Hippo Bingo is just what you thing it is, a site with a Hippo theme (for some reason, a Hippo in the bikini is not really my cup of tea, but it does look kind of cute). Anyhow, the site could look more like a gaming site and less like a Hippo cartoon, but beneath all that lies a well known Dragonfish software solution, so I knew there won't be any problem with games that are looking really great and run smoothly. Although you won't find a No Deposit Bonus, your first Deposit will be matched with a 100% Bonus (up to £100). There are many other interesting promotions, like Free Bingo Games (with cash prizes), and various loyalty and referral bonuses. Bingo is represented with a standard offer: 75-Ball and 90-Ball games, but also a High5 Bingo which I've seen on many new sites. Also, you will find Coverall Jackpots and Progressive Jackpots, but also nice selection of Team games.